It was probably two decades back when a group of journalists and people marched on a street of Guwahati to celebrate Independence Day. As a number of separatist armed militant outfits imposed a general strike on the day (that was the way the ethnic insurgents made them visible in the public domain continuing their decades-long armed struggle against New Delhi) the entire city wore a deserted look. Markets, business centres, private vehicles and even the roads were empty as the militants, through their media statements (which were published with special focus in the local morning newspapers), threatened the people not to join the observation.

The group raising a single national flag (Tri-colours were unavailable at that time in the market and even the people did not keep the flag in residences as it was then assumed as a volatile article to procure from any sources) marched from Ambari to the bank of historic Dighalipukhuri. A photojournalist took a snap of the march and it was then sent to a Delhi-based editor for use.

The editor, who might have had no idea of the then trouble-torn northeast India, asked a strange question, why there was so little number of participants in the march? In reality, the editor missed the valid point that the small group of people came to the street defying the diktat of armed militants, who were trying to run a parallel administration in the alienated region.

One may raise an intriguing question, were the editors of Assam sensitive and responsible enough?  The newspapers (private news channels were yet to fully bloom in the region) in Guwahati probably were sensitive but not responsible. Prior to I-Day or Republic Day, as if the editor (or concerned reporters) were eagerly waiting for the statement from separatist militants boycotting the auspicious days. It always made newspaper headlines, but when the brave and patriotic citizens tried to raise voices against the militants’ diktat, the same editors behaved as unwanted items. So when the small group of patriots started observing the sacred days by hoisting and unfurling the Tri-colour, most of the editors either avoided the news or gave it an insignificant space. 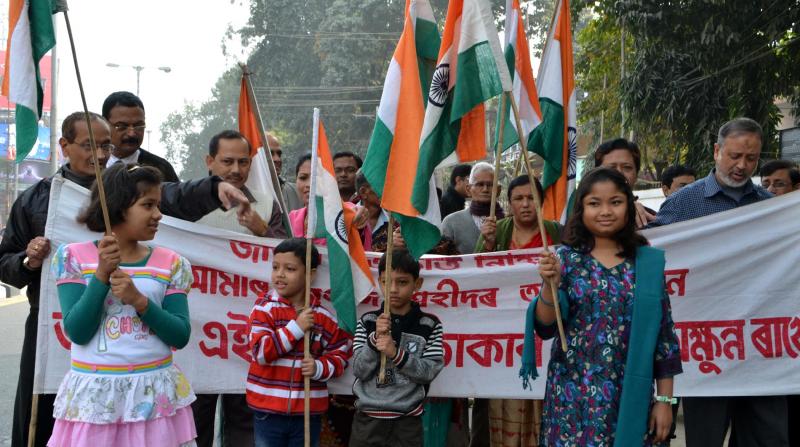 The situation did not improve, even when the Assamese satellite news channels entered the scene after some years. Rather they started often misrepresenting and disrespecting the spirit. As usual, the news channels repeated the militant’s version ‘of why the celebration of I-Day and R-Day was useless prior to both the revered occasions. Many news channels later made it possible for some top militant leaders to address their audience ‘live’. The reporters, equipped with high-resolution cameras, callously asked the students what were their programmes on I-Day and Republic Day (as those were simple holidays because of the militant’s imposed total shut down), but they did not simply remember that one Assamese young girl sacrificed her life for the same Tri-colour. The reporters (from both the print and electronic media) and their editors hardly formulate a simple question to those young people, had they not heard of Birbala Kanaklata!

Journalists Federation of Assam president Rupam Barua, who conceptualized the model to oppose the rebel’s diktats, asserted that Tri-colour is the symbol of our common strength. If we ignore the sacrifice of martyrs it would only indicate our ungratefulness to them. Once started with a small group of journalists (including this writer), the celebration at the city-based press club premises slowly attracted more like-minded fellow Guwahatians, including many children, to join in the occasion (simultaneously with the government celebrations), where the Tri-colour continues to be hoisted and participants take out the processions raising the flags in hands with fanfare. 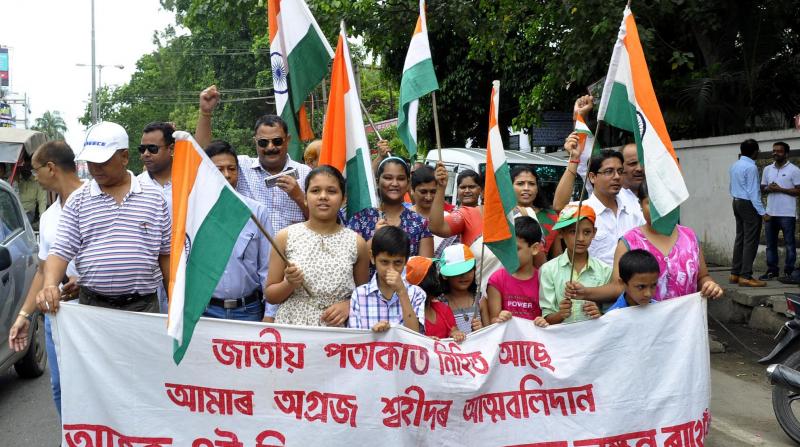 But gone are those days. Now everyone (or a majority of the society) prefers to celebrate both auspicious days with utmost conviction to pay tributes to hundreds of thousands of known and unknown martyrs who laid their lives for a sovereign nation. The ethnic insurgents have lost their support bases in the last few years and their mentors in the media have also disappeared, thanks to the aggressive social media outbursts against those self-centred intellectuals in the recent past.

As we are observing the 75 years of India’s independence and the forthcoming I-Day is going to witness millions of Tri-colours hoisted across Bharat, the small group of Guwahatians today deserve appreciation as their dream has turned into reality and hundred thousand proud residents in the alienated north-eastern region are also eagerly waiting to salute the Tri-colour and pay heartfelt admiration to the martyrs.

*The author is a Guwahati-based senior journalist and an avid appreciator of Tri-colour, who along with a section of working journalists, once faced the wrath of separatist militants.

1 thought on “Flashback: When journalists and people braved gun-totting militants and their I-D decree”