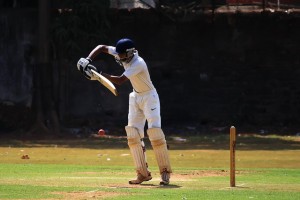 While the eighties witnessed the injection of depth in the Indian batting, the nineties saw the Indian batting side assuming a formidable reputation with the presence of VVS Laxman, Rahul Dravid, Sachin Tendulkar and Sourav Ganguly.  Though not as legendary as the fifties and sixties of West Indies Test cricket side  that imposed fear in the minds of the bowlers due to presence of  Clyde Walcott, Everton Weekes and Frank Worrell, (The Three Ws), the Indian batting side and the feats it achieved were significant and indicative that cricketers had to be highly competitive to gain a Test cap for India.

Sachin Tendulkar who was yet to reach 18, scored his first test century at Lords in an away Test series India played with England. Talking of the Tendulkar era would mean a very long stretch of time to be covered, meaning well over two decades.

This Sunday, let’s touch on some memorable patches that Indian cricket struck with such a brilliant batting and strike bowler Anil Kumble who was ably supported by pacers like Javagal Srinath and Venkatesh Prasad.

In a brief span of time post the retirement of Sunil Gavaskar, the Indian top order regularly collapsed due to the absence of quality openers at Test level cricket. The instability was set right after the arrival of aggressive opener Virender Sehwag who was later joined by Gautam Gambhir. However, India’s performance in the World Cup matches of the nineties era with a few exceptions that proved to be flash in the pan, was dismal. The decade started on a happy note when South Africa being banned from International cricket for pursuing apartheid for over three decades finally managed to re-enter the cricketing world after shedding its racist policies.

India was the first country to resume cricketing ties with South Africa. The visiting South African team played three one-day internationals against India. India won the ODI series by a margin of 2-1. In the World Cup encounters that played into early January 1992 Down Under, the sole conceivable highlight of India’s fixtures was a win against Pakistan. For many in this sub-continent, defeating Pakistan is like winning the World Cup. Ironically, Pakistan emerged from behind and won the World Cup.

Unlike the era of the seventies and the eighties, the nineties went for an overkill when it came to scheduling cricket matches be it Test or ODI. Let’s take an example from the seventies. In 1971, India played two away series with West Indies and England. Only after a span of one year, there was a home series against England. From there on, India faced England in an away series in 1974. The test matches between countries were well spaced and there was adequate time for good Indian Test players to focus on Ranji Trophy and Duleep Trophy domestic matches. Additionally, no one had much expectation from the Indian team when it came to ODIs. Contrastingly, the nineties era was a very high-pressure situation for the Indian cricket team. Having set a precedent of winning the 1983 World Cup and 1985 Champions Trophy in Australia, the cricketing fans had high expectations from the Indian cricketers.

Compared to the previous two decades, it was very rare that the Indian cricket team lost a test or ODI series at home. Batting legend Sachin Tendulkar had captured the fancy of all the Indian cricket fans. However, Tendulkar who had at that stage become opener of the Indian innings in ODIs, was faced with a brief lean patch after he was elevated to being skipper of the Indian team. Subsequently, Sourav Ganguly took over and Sachin returned to form.

Towards the closing of the decade, when playing the 1999 World Cup, India had another flash in the pan when Dravid and Ganguly had a record partnership and India scored a mammoth 371 against Sri Lanka. Besides, India again pipped arch rivals Pakistan in the World Cup fixtures. However, the team ended its sojourn on a listless note. Some Indian fans were seen taking vicarious pleasure when Pakistani wickets kept falling and the team was bundled out for a paltry 131 in their World Cup final encounter with Australia.

We will catch up with how India’s fortunes fluctuated in world cricket post 2000 in the next snippet.