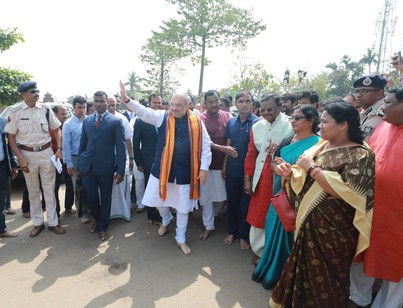 New Delhi:  After Union Home Minister Amit Shah, who became the first central minister to be found Corona positive last Sunday, the dreaded virus has also now inflicted a few of his colleagues in the central ministry.

After week-long medication at Medanta Hospital – a private hospital in Gurugram, Shah was finally tested negative for coronavirus today, said his party’s Member of Parliament, Manoj Tiwari, in a tweet. However, the Home Minister will now have to undergo a second COVID-19 test.

However ministers Arjun Ram Meghwal, the minister of state for heavy industries and parliamentary affairs, and Kailash Chaudhary, Union Minister of State for Agriculture, were now tested positive for Coronavirus on Saturday.

After developing COVID-19 symptoms, Meghwal was tested twice and found corona positive in the second report and was admitted to the All India Institute of Medical Science here.

Chaudhary was on a three-day visit to his parliamentary constituency Jaisalmer and had visited many places before he was tested positive.

Yediyurappa is still admitted at Manipal Hospitals, and the hospital’s director, Dr. Manish Rai stated on Saturday that his vital parameters were stable. “He is being closely monitored by a team of experts,” he said.

TN governor Purohit was asymptomatic and was advised home isolation with medical monitoring.

In the meantime, in Chhattisgarh, two days after the former Vidhan Sabha Speaker Gourishankar Agrawal was found Covid-positive, the Leader of Opposition Dharamlal Kaushik was also tested positive for Covid 19 on Saturday.

Earlier Madhya Pradesh Chief Minister Shivraj Singh Chauhan was tested coronavirus positive on July 25, and is still undergoing treatment in a hospital, he tweeted today from hospital saying he was doing well, and now had no symptoms of COVID. In his state, at least nine MLAs had tested COVID-19 positive last month and after that state government banned the political rallies, agitations, and public meetings until 14 August,2020.

In Karnataka, Tourism Minister C. T. Ravi had tested positive on 14 July. In Maharashtra, five ministers in the Uddhav Thackeray-led Maha Vikas Aghadi government had tested positive earlier. Among them were Shiv Sena leader Abdul Sattar and Congress’ Aslam Shaikh, who holds the textiles, port, and fisheries portfolio — both tested positive in July-end.

NCP ministers Dhananjay Munde and Jitendra Awhad, and PWD Minister Ashok Chavan of Congress had tested positive in June, April, and May, respectively. In Tamil Nadu, Labour Minister Nilofer Kafeel had tested positive on 17 July, the fourth minister in the state to be diagnosed with Covid-19 after K.P. Anbalagan (Higher Education), Seller K. Raju (Cooperation) and P. Thangamani (Electricity). A day earlier, on 16 July, Shailesh Kumar, a minister in the Nitish Kumar-led Bihar government, too was tested positive. Before that, Bihar Legislative Council Chairperson Awadhesh Narayan Singh too was tested positive for coronavirus on July 3.

It may be mentioned that Delhi’s health minister Satyendra Jain was the first high profile politician holding ministerial rank, to have contracted Corona virus. He had to undergo Plasma Therapy and was discharged from a private hospital on June 26, 12 days after he was admitted  there with high-grade fever and a drop in his oxygen saturation levels.