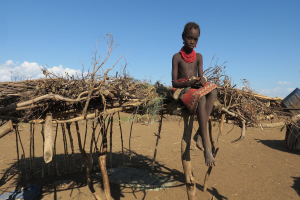 Addis Ababa/Nairobi/New York: One of the most severe droughts in recent history prevailing in the Horn of Africa has left more than 15 million people across the three countries in the region – Ethiopia, Kenya and Somalia – facing high levels of acute food insecurity and severe water shortages.

The present drought follows three consecutive failed rainy seasons and the threat of large-scale loss of life in Africa’s Horn is rising each day. Experts believe there is an urgent need to scale up the humanitarian response to save lives and livelihoods and avert the worst outcomes. The United Nations has called for more funding to tackle this climate-induced emergency.

In Kenya, about 3.5 million people are severely food insecure, and acute malnutrition rates in some areas are more than double the emergency threshold. In the village of Lomopus, community members told the United Nations’ Emergency Relief Coordinator, Martin Griffiths, who was in Kenya on May 12 and 13, 2022, that this was the worst drought in living memory. They said many families had lost their livestock and were struggling to survive and meet their families’ needs.  “Those who manage to buy food are sharing their meagre supplies with their neighbours, while many only have palm fruit to eat,” they said.

In many regions of Ethiopia including the Somali region in particular, more than 8 million people are affected by the drought.  More than 7.2 million people need food aid, and 4 million people need water assistance.  At least 1.5 million livestock have died in the country due to lack of pasture and water, while an additional 10 million livestock are at risk.  Many of the remaining livestock are weak and provide little or no milk, which is affecting children’s nutrition.  Schooling for more than half a million children has also been impacted. At least 286,000 people in Ethiopia have migrated in search of water, pasture or assistance, and these are people with the means to travel.  Others, often the elderly or the sick, have had to stay behind.

Griffiths met with representatives of the Government, people on the front lines of the crisis, local authorities and national and international humanitarian partners. He informed that in Ethiopia,  $480 was required to support the humanitarian response through October in Ethiopia.

Last month, Griffiths released $12 million from the Central Emergency Response Fund (CERF), while the Ethiopia Humanitarian Fund also apportioned $17 million to the response. The UN Secretariat in New York disclosed that some 4.9 million people were thus far provided with food, more than a million livestock have been treated or vaccinated, and over 3.3 million people were receiving water assistance in Ethiopia.

Griffiths emphasised that the world must not look away from the rapidly escalating drought crisis in the Horn of Africa, calling for urgent action and increased resources to help communities survive the drought.

Studies have shown that severe drought affects Africa more than any other continent, with more than 300 events recorded in the past 100 years, accounting for 44 per cent of the global total. More recently, sub-Saharan Africa has experienced the dramatic consequences of climate disasters becoming more frequent and intense

Globally too, the number and duration of droughts have increased by 29 per cent since 2000, as compared to the two previous decades. When more than 2.3 billion people already face water stress, this is seen as a “huge problem”.

A report published this week by the United Nations Convention to Combat Desertification forecasts that by 2050, droughts may affect over three-quarters of the world’s population. Mortality related to droughts represents around 60 per cent of the total deaths caused by extreme weather events, while droughts represent only 15 per cent of natural disasters. The report points out that between 1998 and 2017, droughts have led to global economic losses of approximately USD 124 billion.

Drought is not just the absence of rain; it is fueled by land degradation and the climate crisis, the report says, adding that droughts are becoming more frequent and severe across all continents – “an omen of a world where freshwater and fertile soils are increasingly scarce”.

Recent scientific studies on drought point to a precarious future for the world and all nations says the report titled Drought in Numbers 2022-restoration for readiness and resilience.