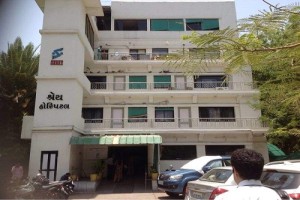 Ahmedabad: The fire at a COVID hospital at Vijayawada in Andhra Pradesh has again brought to limelight the tragic fire incident at the Shrey Hospital in Ahmedabad on August 6 in which eight Corona patients recuperating at its ICU unit died due to suffocation.

The relatives of the deceased and the people in general have raised questions if the BJP government in Gujarat is trying to protect the party activists who run the hospital. The question has been raised because even after four days not even an FIR had been filed by the police, nor the Forensic Science Laboratory which collected samples from the spot to analyse the likely causes of the fire has not yet submitted its report.

Was the fire in COVID-19 hospital an offshoot of Gujarat government’s drive to regularize illegal constructions?

Each is blaming the other for the delay. The Navrangpura police, which have only filed a case of accidental death of eight COVID patients said an FIR would be filed only after the FSL, and other concerned authorities filed their reports to enable the police to pinpoint the guilty of negligence. The FSL sources said the delay in submitting the report was due to the time it was taking in closely analyzing some 30-40 samples it had collected from the scene of the accident.

The director of the hospital, Bharat Mahant, the son of a former Congress minister and also a former state president of the Congress, had crossed over to the BJP only last year after his entry in the party was personally cleared by the prime minister Narendra Modi. He had joined the BJP along with his supporters with a lot of fanfare in the presence of Modi in one his election rallies during the 2019 Lok Sabha elections.

Even the illegal additions in the construction of the hospital building were regularized on a payment of “impact fee” by the Ahmedabad municipal corporation only after he joined the BJP.

The police normally file an FIR against the concerned authorities pending investigations but strangely in the case of the Shrey hospital despite the magnitude of the accident, it was waiting for all the reports to be filed before it would lay its hands on BJP activist. Bharat Mahant has been reportedly kept under the police watch in his residence in Gandhinagar.

A senior police official who was investigating the case said the statements of the relatives of the patients who died in the fire as well as some of the survivors who had been shifted to another hospital before sealing the Shrey hospital, and that of the medical staff had already been taken. “The FSL report is yet to come. The team to check the electrical system has visited the hospital. The team will check whether the wires used were of sub-standard quality or it had adequate load-bearing capacity and other aspects. Once both the FSL and the electrical team reports are submitted, the decision to file an FIR will be taken.”

Incidentally one of the reports suggested that plugging in a garden-stand fan at the same switch board with which a ventilator was connected had caused the short circuit and the fire. The hospital staff said the fan was plugged in after one of the patients complained of excessive heat in the ICU unit.

The Ahmedabad municipal corporation sources the fire audit ordered for all the 72 COVID-designated hospitals in the city, including more than 60 private hospitals after the fire in the Shrey hospital, had completed the task and have issued fire safety notices to 40 hospitals.

During the investigation, the sources said, it came to light that the Shrey hospital had no fire no objection certificate (NOC) as required. Besides Shrey, the officers found that several other hospitals also had no NOC, most of them had not even applied for the NOC after the expiry of the installed system or had not received the certificates from the authorities after proper investigation. Even many government-run COVID hospitals were found wanting in installing the fire-safety measures. In cases where the last NOC had expired more than a year ago, the authorities attempted to blame the lockdown and the Corona pandemic to justify the absence of fire safety measures.