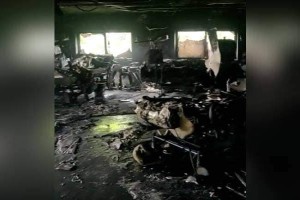 Ahmedabad: The Gujarat government’s decision to regularize illegal constructions by charging a penalty may have taken the lives of eight Corona patients in a tragic fire in a COVID-19 designated hospital in Ahmedabad on the wee hours of Thursday.

While the report of the two-member committee of senior officials appointed by the chief minister Vijay Rupani is expected in the next couple of days, it has transpired that not only the fire safety devices in the Shrey Hospital were almost all of expiry dates, the entire four-storey building, barring the ground floor, in the city’s posh Navrangpura locality, in which the hospital was housed, was an illegal construction and was “regularized” last year after paying an “impact fee.”

The idea to regularize illegal constructions by charging a penalty was devised by the state government to fill its coffers and that of the cash-starved local self-government bodies was devised when the prime minister Narendra Modi was the chief minister of the state and accordingly amidst strong objections from many social activists the “Gujarat Unauthorized Development Regularization (Impact Fee for Regularization of Illegal Properties) Act,” was passed by the state Assembly in 2011. The measure had come as a great relief to thousands of owners of residential premises who had extended their covered carpet areas or added other constructions against the original plan approved by the municipal corporations and municipalities in the state. The act immediately snuffed out the fear among them that the local bodies could anytime bulldozed the illegal portions and after some initial hesitancy after which the government also agreed to reduce the rates of the impact fees, thousands of applications were filed for regularization of the illegal constructions by paying the penalty. The state government itself had estimated, as it told the Gujarat high court during a case then, that Ahmedabad city alone had about five lakh illegal constructions. The official sources said the city civic body had earned more than Rs four crores by simply signing some papers regularizing the first 500 application under the impact fee act.

Not only the residential premises, many commercial complexes too were regularized under the act without the concerned authorities ever bothering to check whether the illegal constructions they were about to regularize were safe for human lives. Shrey Hospital apparently was one of such complexes which was originally approved as a residential colony but was used as a commercial establishment.

The official sources said the building when approved in 1996 was meant to be shopping complex on the ground floor and residential for the two above floors. But right from the beginning, the entire building was used as a commercial complex and the fourth floor was added, which also included a canteen for the hospital, without any approval from the municipal corporation.

Local politics also had a role to play in regularizing the complex. It was regularized on payment of an impact fee only after its chairman Bharat Mahant joined the BJP in the presence of Modi in a campaign meeting during the 2019 Lok Sabha elections. The 66-year old Bharat Mahant was the son of a senior Congress leader in the state, Mahant Vijaydas, who was a minister in the Madhavsinh Solanki cabinet and had also served as a president of the Gujarat Congress. Bharat had also unsuccessfully contested the state Assembly elections on the Congress ticket in the past but joined the BJP last year. Presently residing in Gandhinagar, Bharat had been kept under house arrest after the fire accident pending the inquiry report by the police. Other trustees of the
hospital are also being questioned by the police in connection with the accident.

The fire, said to be caused by electric short circuit, had broken out on the hitherto illegal fourth floor which housed the hospital’s ICU unit and eight Corona patients on ventilators died. The reports of the post- mortem on the bodies, carried out by a team of 22 doctors, all wearing PPE kits, indicated that all the deaths were caused by suffocation due to inhaling carbon monoxide, and not so much due to burns. Only a ward boy who rushed to the ICU on hearing about the fire sustained some burn injuries when he tried to extinguish the fire that had caught the hairs of a patient. The ward boy was among the 41 other Corona patients in the hospital shifted to another COVID-designated hospital in the city.

Though most of the deceased were senior citizens, except two aged 42 and 51, most of them were stated to be on the path of recovery and three of the patients were scheduled to be released Thursday morning and two to be shifted from the ICU.

But why blame the private hospitals only? A reality check of the government-run civil hospital in Ahmedabad, touted as the Asia’s biggest public hospital, and its miniature Sola civil hospital also in Ahmedabad, showed that the hospitals badly lacked the fire safety devices. Only after the Shrey fire incident that the state government woke up and the chief minister has directed the urban development department to check the fire safety devices in all the COVID hospitals in the state. A checking spree launched by the Ahmedabad fire brigade in the city found that nearly 90 per cent of the hospitals did not have adequate fire safety measures, most of the equipment carried expiry dates of more than a year or more and did not carry the necessary no objection certificates from the fire brigade or other concerned authorities. At all hospitals, including the government civil hospital, the stock answer given by the responsible officers was that the “renewal process under progress.”

– The writer is a senior journalist