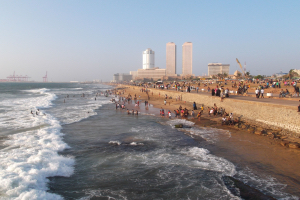 Pnom Penh: With many holding the United States along with China and Russia responsible for the Sri Lankan economic crisis, the US Secretary of State Antony J Blinken today said the International Monetary Fund (IMF) is working out an arrangement to support Sri Lanka to emerge out of the present economic crisis. The IMF is also working on “appropriate” debt restructuring that has to be done on an equitable basis with all of the creditors doing what’s necessary to support Sri Lanka, he said.

In April 2022, Sri Lanka announced a default of $51 billion on foreign debt and said it awaited a bailout from the International Monetary Fund (IMF).

Blinken who met Sri Lankan Foreign Minister Ali Sabry on the sidelines of the ASEAN Regional Forum here today said the US had also provided about $179 million worth of assistance, including loans and direct support to Sri Lanka, since June.

Blinken also met Indian External Affairs Minister Dr S. Jaishankar here and exchanged views on Sri Lanka’s economic crisis and emphasized that both nations stand with the people of Sri Lanka and support their aspirations for a return to economic and political stability through democratic and constitutional processes.

“Obviously, Sri Lanka is in a moment of challenge and crisis; the United States has worked hard to step in to support Sri Lanka in this moment,” he told Sri Lankan minister Sabry, who in turn, appreciated the role played by the US in trying to get an IMF bailout as soon as possible and that the debt is restructured.

“We understand the challenges, and in this challenge, we also understand there are opportunities,” Sabry said adding that Sri Lanka looked forward to working with the American administration,  throughout. He referred to a recent high-level US delegation visiting Sri Lanka, and also to the several roundtable discussions and the support for Colombo’s  IMF approach from the U.S. Treasury and State Department and from the government in general. He acknowledged the support provided by USAID and hoped for continued US support, particularly in some areas of “very difficult reforms”.

Incidentally, quite a few economists hold the US as one of the culprits behind the Sri Lankan crisis blaming the American interest rate hikes that put huge pressure on Sri Lanka’s dollar-dependent economy, while China became one of the biggest creditors of the island nation. That apart, the Russian invasion of Ukraine raised the prices of fuel and food, which directly impacted Sri Lanka.

Incidentally, even China, which reached out to Sri Lanka last month to discuss a “proper way” to handle the matured debts related to China soon after the Sri Lankan government announced to suspend international debt payments, has been in the forefront over the past months, announcing a total of RMB500 million worth of emergency humanitarian assistance to Sri Lanka.