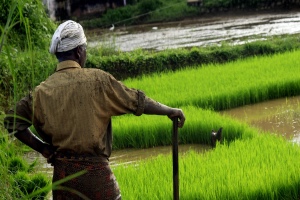 Dharwad: Groundwater provides half of the drinking water worldwide and 40 per cent water for irrigated agriculture. It sustains the ecosystem, maintains the baseflow of rivers, prevents land subsistence and seawater intrusion.

Depletion of the groundwater table is a major worry the world over. Aptly, the United Nations chose the theme of this year’s World Water Day, which is observed on March 22, “Ground Water: Making the invisible visible”.

There has been while on the one hand overexploitation of groundwater, on the other hand, at many places there is suboptimal utilisation too.

In Dharwad in Karnataka, speakers on the World Water Day at the Water And Land Management Institute (WALMI), under the Water Resources Department, Government of Karnataka, emphasised the need to encourage people’s involvement in groundwater conservation.

It may be mentioned that in Karnataka, 50 talukas face groundwater problems. The problem becomes acute also because of the rocky terrains here and where the groundwater at most of the places cannot percolate down beyond 100-200 feet. Moreover, the destruction of Western Ghat is also contributing to this scarcity as about 75 per cent of rainwater is wasted, according to experts.

Speakers at the programme organised by WALMI stressed tapping the vast traditional wisdom of the village elders about farming and water usage and their conservation. They could also be the best resource persons to help identify zones with porous rock structures.

Padamshree Mahaling Naik, who inaugurated the programme by watering the soil and plants, said water can change one’s life and “I am the best example”.

While doing manual jobs in some landlords’ land Naik developed the dream of owning land and doing farming on his own and farming needed water. “I struggled for more than four decades day and night to bring water to my land by digging tunnels in the hillocks. After several rounds of efforts, water was available and I started irrigated farming,” he said.

Further, to conserve water Naik practised underground water recharge and adopted micro-irrigation for water-saving. With organic farming practice, his family life changed. This achievement was noticed by a Government of India Organisation which recommended his name for the coveted Padmashree award.

“Future days will be very hard for water, especially for drinking water. Therefore, I appeal to everyone on the occasion of World Water Day to take utmost care to conserve underground water,” Naik said.

“We need one Mahaling Naik for every village and we all should get involved in the conservation of underground water under their guidance and traditional knowledge,” said the Chief Guest of the event, Deepak Parvatiyar, Chief Editor of Global Bihari and Media Advisor to Indian Federation of United Nations Association, New Delhi. He called upon the conservation of the most essential natural resource like water which was an essential part of panchayats. “Conservation of underground water was successful only when participants were involved in its management,” he said. Lauding the efforts of  WALMI, Dharwad in water conservation, he said there was the need to encourage frontline organizations such as WALMI which have direct interaction with water and farming communities and the Government should be more forthright in supporting such Institutes.

Dr Rajendra Poddar, Director, WALMI, Dharwad presided over the function, said one needed to understand different dimensions of underground water and ensure proper development, conservation and efficient utilisation. “This year’s theme on underground water is timely and appropriate. This calls for creating awareness among the masses,” he said.

Dr Ashok Dalvai, IAS, Chief Executive Officer, National Rainfed Area Authority of India in his online message on the occasion explained that surface and underground waters were part of an integrated whole and both affected each other. “Misuse of underground water affects the climate and damages the earth too,” he said. With regard to Karnataka he cautioned that since it has a large area under dry farming and no perennial rivers, conservation of underground water was very crucial.

Panchappa Kalaburgi, farmer’s leader from Vijayapura participated as a guest and observed that Government should give equal importance to field level water management as much as given to the creation of new irrigation projects. At the same time, farmers too have a very important role in water conservation and management.

Thousands of farmers, engineers, students and water workers participated in the event from all over Karnataka. Prof.B.Y.Bhandiwaddar and Er. B. Girish organised the event and Er. Mahadevagouda Huttanagoudar coordinated the stage event. Faculty and staff of WALMI participated. Womenfolk took out Kumbayatra from the WALMI tank to the stage before the event.