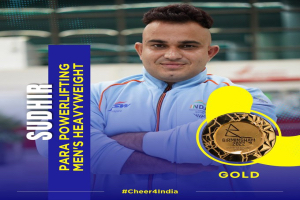 The 27-year-old Sudhir has an impairment. His win opened India’s para sports medal account. Murali Sreeshankar claimed a silver medal in the men’s long jump, adding a second medal in the athletics category.

Prime Minister Narendra Modi has congratulated Sudhir for winning Gold Medal in para powerlifting men’s heavyweight event at Commonwealth Games 2022. The Prime Minister tweeted; “A great start to the CWG 2022 para-sports medal count by Sudhir! He wins a prestigious Gold and shows yet again his dedication and determination. He has been consistently performing well on the field. Congratulations and best wishes to him for all upcoming endeavours.”

Modi also congratulated M. Sreeshankar and tweeted, “M. Sreeshankar’s Silver medal at the CWG is a special one. It is after decades that India has won a medal in Men’s long jump at the CWG. His performance augurs well for the future of Indian athletics. Congratulations to him. May he keep excelling in the times to come”