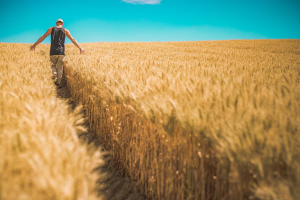 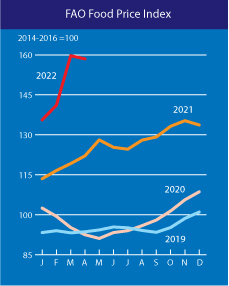 Rome: World food commodity prices decreased in April 2022, after a large jump the previous month, led by modest declines in the prices of vegetable oils and cereals, the Food and Agriculture Organization of the United Nations (FAO) reported today.

The FAO Food Price Index averaged 158.5 points in April, down 0.8 per cent from the all-time high reached in March 2022. The Index, which tracks monthly changes in the international prices of a basket of commonly-traded food commodities, remained 29.8 per cent higher than in April 2021.

The FAO Vegetable Oil Price Index decreased by 5.7 per cent in April, shedding almost a third of the increase registered in March, as demand rationing pushed down prices for palm, sunflower and soy oils. Uncertainties about export availabilities out of Indonesia, the world’s leading palm oil exporter, contained further declines in international prices. 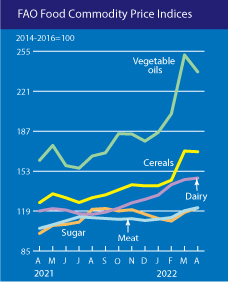 “The small decrease in the index is a welcome relief, particularly for low-income food-deficit countries, but still food prices remain close to their recent highs, reflecting persistent market tightness and posing a challenge to global food security for the most vulnerable,” said FAO Chief Economist Máximo Torero Cullen.

The FAO Cereal Price Index declined by 0.7 points in April, nudged down by a 3.0 per cent decline in world maize prices. International wheat prices, strongly affected by the continued blockade of ports in Ukraine and concerns over crop conditions in the United States of America but tempered by larger shipments from India and higher-than-expected exports from the Russian Federation, increased by 0.2 per cent. International rice prices increased by 2.3 per cent from their March levels, buoyed by strong demand from China and the Near East.

Meanwhile, the FAO Sugar Price Index increased by 3.3 per cent, buoyed by higher ethanol prices and concerns over the slow start of the 2022 harvest in Brazil, the world’s largest sugar exporter.

The FAO Meat Price Index increased by 2.2 per cent from the previous month, setting a new record high, as prices rose for poultry, pig and bovine meat. Poultry meat prices were affected by disruptions to exports from Ukraine and rising avian influenza outbreaks in the Northern hemisphere. By contrast, ovine meat prices averaged marginally lower.

The FAO Dairy Price Index also was up, by 0.9 per cent, on the back of persistent global supply tightness as milk output in Western Europe and Oceania continued to track below their seasonal levels. World butter prices rose the most, influenced by a surge in demand associated with the current shortage of sunflower oil and margarine. 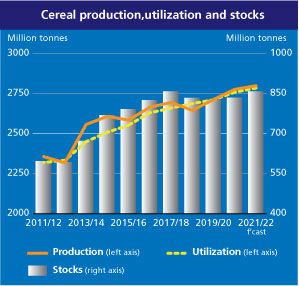 FAO also released a new Cereal Supply and Demand Brief with updated forecasts pointing to a likely 1.2 per cent decline in world trade in cereals in the 2021-22 marketing year (July/June) compared to the previous year.

The decline is associated with maize and other coarse grains, while trade volumes for rice are predicted to grow by 3.8 per cent and that for wheat by 1.0 per cent.

World cereal utilization for the 2021/22 period is projected to increase by 0.9 per cent from the previous year to 2 785 million tonnes.

FAO’s new estimate for world cereal stocks by the close of seasons in 2022 now stands at 856 million tonnes, 2.8 per cent above opening levels, led by a build-up in maize inventories partly due to suspended exports from Ukraine. If confirmed, the global cereal stocks-to-use ratio would end the period unchanged at a “relatively comfortable supply level” of 29.9 per cent, according to FAO.

FAO still predicts global wheat production to grow in 2022, to 782 million tonnes. That forecast incorporates an expected 20 per cent decline in harvested area in Ukraine as well as drought-driven output declines in Morocco.

For coarse grains, the Brief indicates that Brazil is on course to harvest a record maize crop of 116 million tonnes in 2022, while weather conditions are likely to dent maize output in Argentina and South Africa. Initial planting surveys indicate that maize acreage in the United States of America is likely to decline by 4 per cent, amid concerns over the high costs of fertilizers and other inputs.