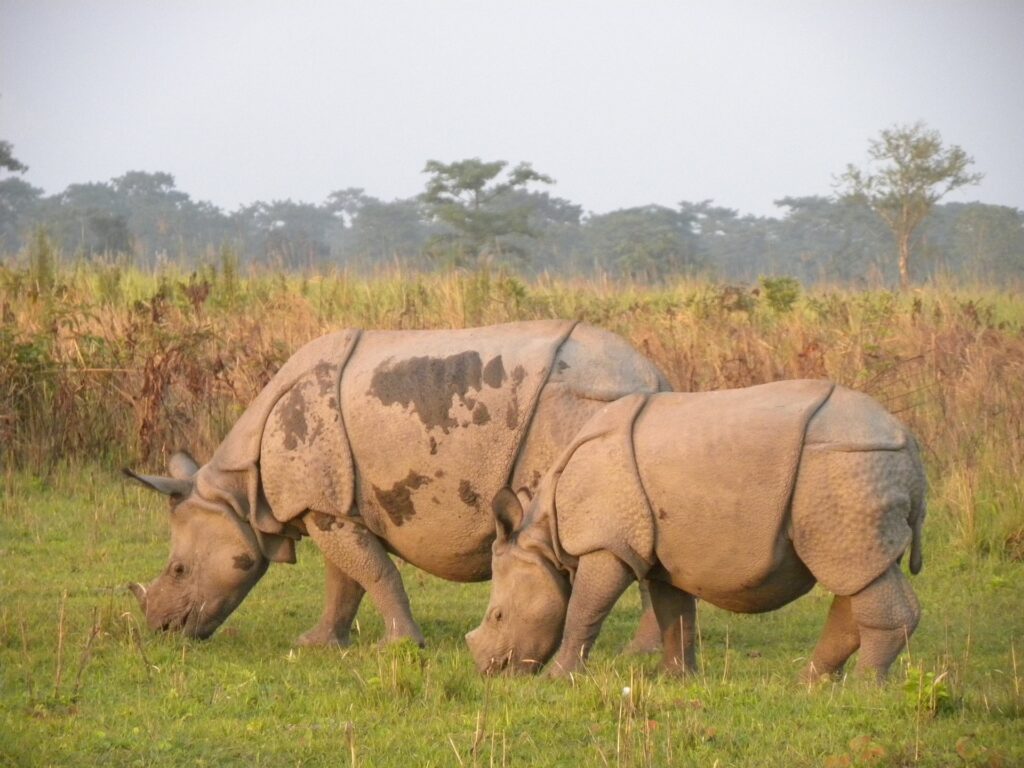 However, incidents of poaching related to critically endangered rhinoceros in various forest reserves of Assam in northeast India have decreased drastically, if government figures are to be believed. Brutal laws against the poachers, strengthening of ground staff inside the protected forest areas and increasing public awareness in the fringe localities of national parks and wildlife sanctuaries across the State have positively impacted the mission to save the one-horned rhinos. Unlike other parts of the globe, the common people of Assam irrespective of their political, ethnic or religious differences, maintain a strong will to protect the giant animals.

For records, only two rhinos were poached in Kaziranga National Park and Tiger Reserve since January 1, 2021, till date. The last incident took place probably in the last week of December 2021, as a decomposed carcass of a fully-grown (around 30 years old) female rhino was recovered inside the world-famous forest reserve the next month. As the precious horn was missing, for which the gigantic animal was apparently hunted down, it could not be a natural death. But it was not confirmed when exactly the rhino was killed.

Supporting his stand, the State forest department recently clarified that the female rhino (whose carcass was recovered near Silekhunda camp under Kohora range in January last year) was killed on 28 December 2021. So Sarma’s statement justifying ‘not a single rhino was poached in 2022’ across Assam was seemingly correct. But it may be difficult for wildlife lovers to accept that no responsible State agency had the information about female rhino poaching till January 15, 2022. Moreover, the Kaziranga authority was then silent as the media outlets reported it as the first case of rhino poaching in 2022.

Native to the Indian subcontinent, the single-horn rhino (also known as rhinoceros unicorns) is one of the worst affected rhino species. The reason behind the poaching of rhinos is due to the high demand for horns in a number of countries (including China) where people term it as black ivory. A matured horn may fetch a huge sum of money in the international market. The animal enjoys great sexual power, as its mating time may continue for 45 minutes. So many people unscientifically believe that one can achieve unusual power with the help of rhino horns (using it as a traditional Viagra).

The rhino horns are also believed to have other medicinal values supposed to cure high fever, stomach ailment and cancer. Taiwan, Thailand, South Korea, Vietnam and the Middle East are also known to be huge markets for horns, where the use of horns for medical purposes and scientific research is legalised. Rhinos are recognized as vulnerable by the International Union for Conservation of Nature and India’s Wildlife Protection Act gives enormous power to the rangers for protecting the grass-eating pachyderm. The veterinarians argue that rhino horns comprise the same protein that constitutes the formation of hair.

Rhinos are recognised as a pride to the people of Assam and the 800 square kilometre Kaziranga reserve supports around 2,613 priced animals (whereas the global population of one-horned rhinos is around 3,700). The UNESCO world heritage site on the south bank of the mighty river Brahmaputra also gives shelter to over 150 Royal Bengal tigers and around 250 leopards, over 5500 Asiatic elephants, a sizable number of buffalos, different species of deer, birds, fishes, etc.

Besides Kaziranga, other forest reserves namely Pobitora Wildlife Sanctuary (around 107 rhinos), Orang National Park (125) and Manas National Park (50) also support the rhino population to make a total count for Assam of over 2650 living rhinos. Every year, over 100 rhinos die because of natural causes in those forest reserves. Assam expects to increase the rhino population to 3,000 as the incidents of poaching are decreased following the deployment of ground forces with sophisticated weapons and other modern gadgets.