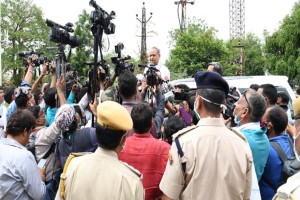 Jaipur:  The political upheaval within the ruling Congress continued in Rajasthan on Monday with Chief Minister Ashok Gehlot attacking former state party president and deputy chief minister Sachin Pilot, accusing the latter of having “played a game”. “I used to say that a conspiracy was underway to topple the state government. He may have an innocent face, have good command over English and Hindi, and may have impressed the media, but people know his contribution to the state. We never questioned him as to how much work he was doing, in the interest of the party. But we knew nothing was happening. Over the last 7 years, the only state in the country where no one in the party has asked a Congress state unit chief to quit was Rajasthan. Neither a senior not a junior has ever demanded that Pilot be replaced as state chief’.

A few MLAs of Pilot camp demanded apologies from Gehlot for insulting their leader.

The Gehlot government, which has been accusing the Bharatiya Janata Party-led Central Government, of conspiring to destabilising his government by all means including the misuse of Central Investigating agencies, also revoked  the general consent under Section 6 of the Delhi Special Police Establishment (DSPE) Act, 1946, which is required for CBI investigation and issued a notification that stated that prior consent of the state government shall be required on a case-to-case basis by the CBI for investigation of any offence or class of offence under the said Act.

Moreover, the Special Operations Group of the state police served a notice on Union Minister Gajendra Singh Shekhawat under a CrPC section that requires him to appear before the investigation officer probing an alleged conspiracy to topple the state government. The notice was sent to the personal secretary of Shekhawat in connection with the audio tapes where in the minister was allegedly talking about bringing down the Rajasthan government.