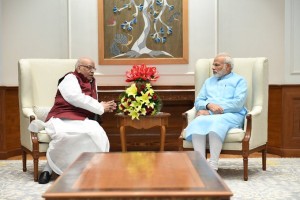 Lucknow: Madhya Pradesh governor Lalji Tandon, 85, passed away after a prolonged illness in the early hours of Tuesday. Tandon was admitted to Medanta hospital here since June 11, and his condition was serious. He had  breathing problems, difficulty in urination and fever. His son, Ashutosh Tandon, tweeted at 7.04 am Tuesday stating in Hindi that  “babuji nahi rahe (my father is no more)”. Later he tweeted that Tandon breathed his last at 5.35 am and his last rites would be performed at Gulala Ghat Chowk here at 4.30 pm.

Paying tribute to the departed soul, President Ramnath Kovid stated that in the passing away of Tandon, “we have lost a legendary leader who combined cultural sophistication of Lucknow and acumen of a national stalwart”.  Prime Minister Narendra Modi tweeted that Tandon was “well-versed with constitutional matters…(and) will be remembered for his untiring efforts to serve society. He made a mark as an effective administrator, always giving importance of public welfare. Anguished by his passing away”.