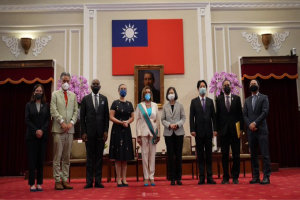 As Pelosi today discussed deepening the economic ties, strengthening the security partnership and defending the “shared democratic values” between the two nations with the President of Taiwan Tsai Ing-wen, making no pretensions, Chinese State Councilor and Foreign Minister Wang Yi said that “those who offend China will surely be punished”.

President Tsai Ing-wen tweeted that Pelosi’s visit not only reflects strong US Congressional support for bilateral ties – “it also sends a message to the world that democracies stand together in the face of common challenges”.

Elaborating on China’s position on Pelosi’s visit to “China’s Taiwan region”, Yi termed the visit as an “out-and-out farce”.  He told reporters on the sidelines of the series of foreign ministers’ meetings on East Asia cooperation in Cambodia’s capital Pnom Penh today that the US was playing “dirty tricks to encroach upon China’s sovereignty” under the guise of “democracy”, and separatist forces for “Taiwan independence” like Tsai Ing-wen are “hanging on to the U.S. coattails, turning their back on the just cause of the Chinese nation”. He declared that “these perverse actions cannot in any way change the prevailing international consensus on the one-China principle, nor can they change the irreversible historical trend of Taiwan’s return to the motherland”.

Taiwan’s Ministry of Foreign Affairs (MOFA) emphasized that China’s provocative actions have already posed a challenge to the international order and disrupted peace and stability across the Taiwan Strait and in the region, and said the government of Taiwan will “even more staunchly” safeguard Taiwan’s national sovereignty and territorial integrity, and will proactively enhance Taiwan’s self-defence capabilities.

The Chinese People’s Liberation Army has announced imminent live-fire military drills and has warned aircraft and vessels from other countries not to enter designated airspace and waters. “These actions have had an even more serious impact on international trade and the international legal order,” MOFA said.

Faced with the current situation, Taipei said it will continue to maintain close communication and coordination with the United States and “other like-minded nations” to jointly protect the “rules-based” international order, prevent an escalation in regional developments, and ensure security across the Taiwan Strait as well as peace, stability, and prosperity in the Indo-Pacific.

Taiwan today also took exception to Russia’s stand on the issue of Pelosi’s visit to the country. Last night, Russia’s Ministry of Foreign Affairs issued a statement on Pelosi’s visit to Taiwan that declared that “the Chinese side is entitled to take any measures necessary to protect its sovereignty and territorial integrity” and that “the PRC government is the only legitimate government representing all of China, and that Taiwan is an inalienable part of China.”

“Only the government that wins the mandate of the Taiwanese people through free elections can represent them in the international arena. No matter how much the Chinese government attempts to distort the facts with regard to its claims over Taiwan, it cannot change this reality,” MOFA stated, accusing Russia of disregarding the status quo and echoing China’s “false” claims.

Taiwan mentioned that it has long been subject to “hybrid threats” from the government of China. “The government and people of Taiwan are determined to defend themselves and earn others’ support and unite as one in protecting Taiwan against China’s rhetorical assaults and military intimidation,” MOFA asserted.

Meanwhile, the government of Taiwan will continue to strengthen cooperation with the democratic community to gain the support of like-minded nations. “Taiwan upholds the values of democracy, freedom, human rights, and the rule of law and contributes to global economic development and regional stability. These serve to parry the expansion of China’s authoritarianism. Through close cooperation with like-minded countries, Taiwan will further strengthen international efforts to promote justice; resolutely safeguard the universal values of democracy and liberty and the rules-based international order; and ensure democracy, freedom, peace, and stability worldwide,” MOFA stated.

Pelosi’s visit marks the first visit by a US House Speaker in 25 years since Newt Gingrich came to Taiwan in April 1997. It is also Speaker Pelosi’s first trip to Taiwan in 22 years. The fact that the delegation includes key Congressional leaders from the House Committees on Foreign Affairs, Veterans’ Affairs, and Ways and Means underscores the high level of support for Taiwan-US relations from the US Congress and the wide scope of bilateral cooperation across all fields.

Taipei claimed that the inclusion of Taiwan in the itinerary of Speaker Pelosi’s first Asian tour since the US Congress resumed overseas travel this year fully demonstrates the high regard that the Congress has for Taiwan and once again emphasizes the rock-solid US commitment to Taiwan. “The visit by Speaker Pelosi and other prominent members of Congress will enhance the close and cordial relations between Taiwan and the United States and further deepen global cooperation between the two countries across a broad range of areas,” MOFA stated.