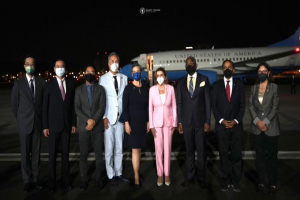 Taipei/Beijing/New York: Snubbing China, the United States House Speaker Nancy Pelosi arrived in Taipei today evening and announced that her visit “reiterates that America stands with Taiwan: a robust, vibrant democracy and our important partner in the Indo-Pacific”.

In a series of tweets, she said that by travelling to Taiwan, “we honor our commitment to democracy: reaffirming that the freedoms of Taiwan — and all democracies — must be respected”. According to her,  the visit is one of several Congressional delegations to Taiwan – and it in no way contradicts longstanding United States policy, guided by the Taiwan Relations Act of 1979, U.S.-China Joint Communiques and the Six Assurances. “America’s solidarity with the 23 million people of Taiwan is more important today than ever, as the world faces a choice between autocracy and democracy,” she further stated and claimed her discussions with Taiwan leadership “reaffirm our support for our partner & promote our shared interests, including advancing a free and open Indo-Pacific region”.

Beijing responded with its Ministry of Foreign Affairs issuing a statement that Pelosi’s visit to “China’s Taiwan region” in disregard of China’s strong opposition and serious representations is a “serious violation” of the one-China principle and the provisions of the three China-U.S. joint communiqués.”

🇨🇳 Chinese Foreign Ministry spokesman: America will pay for the consequences of the trip to Taiwan. pic.twitter.com/u5m8opVaCM

Chinese foreign ministry stated that the visit has a severe impact on the political foundation of China-U.S. relations, and seriously infringes upon China’s sovereignty and territorial integrity. It gravely undermines peace and stability across the Taiwan Strait, and sends a seriously wrong signal to the separatist forces for “Taiwan independence”.

“China firmly opposes and sternly condemns this, and has made serious démarche and strong protest to the United States,” the foreign ministry stated.

Earlier, prior to Speaker Pelosi’s arrival in Taipei, the Chinese foreign ministry spokesperson Hua Chunying told reporters today that all eyes are on Pelosi’s trip to Asia. “We are closely following the itinerary of Speaker Pelosi. And if the US continues down the wrong path, we will take strong and resolute measures to protect our sovereignty and security interests,” she said.

She revealed that China and the US had maintained close communication in Beijing and in Washington at different levels and through different channels, and that Beijing had “repeatedly and unmistakably” expressed to the US side its firm opposition to Speaker Pelosi’s visit to Taiwan.

Yesterday, the US Secretary of State Antony J Blinken told reporters that Speaker Pelosi’s potential visit to Taiwan was “entirely her decision, and one that we respect one way or the other”. On the margins of the nuclear non-proliferation treaty review conference yesterday, Blinken further said that “Congress is an independent, coequal branch of government…this is very much precedent in the sense that previous speakers visited Taiwan…And so if the Speaker does decide to visit, and China tries to create some kind of crisis or otherwise escalate tensions, that (responsibility) would be entirely on Beijing”.

Responding to Blinken’s remarks, Chuying today accused the US of indulging in provocations “that have led to the escalation of tensions in the Taiwan Strait… The US should and must take full responsibility for it. Secretary Blinken’s words confound black with white and have once again revealed the hegemonic mindset and extortionist logic of some people in the US”. She went on to quote certain media reports to make a point that Pelosi’s visit to Taiwan would be “foolish, dangerous, and unnecessary; that it would be a dangerous gamble; that it would be hard to imagine anything more reckless and provocative than this; and that if the US side misjudges or mishandles the cross-Strait situation, it will lead to disastrous consequences for the Taiwan region and even the security, prosperity and order of the entire world”.