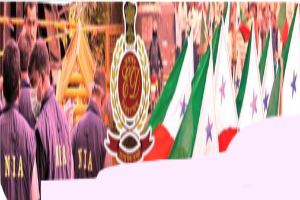 The nationwide crackdown on the People’s Front of India (PFI), a “social” organization that proclaims itself to be championing the cause of social justice and liberty for Muslims, Dalits and backward classes across the country, by the National Investigation Agency (NIA) and the Enforcement Directorate (ED), has caused a communally tense atmosphere, especially in the southern states of Kerala, Karnataka and Tamil Nadu. Intelligence sources say the NIA and ED raids are in progress in 93 locations across 15 states.

Today, miscreants believed to be PFI activists hurled a petrol bomb at the Rashtriya Swamsevak Sangh office at Mattannur in Kannur, Kerala. In the State, PFI workers took to the streets across the state and stalled the vehicular movement, demanding that the NIA and ED stop their actions. The Kerala High Court today took suo moto cognizance of the PFI “flash” strike and termed it illegal as no strike could be organised without seven days’ public notice. It issued directions to the police to ensure adequate measures to ensure that no damage was done to the public and private properties.

Reportedly over 500 PFI activists were put under arrest and about 400 others were put under preventive detention during the twelve-hour strike called by the PFI today to protest the arrests of its leaders. Yesterday the NIA arrested 106 PFI activists in 11 States for their alleged involvement in terror activities in the country. Among those arrested in the crackdown by Central agencies during a nationwide swoop, yesterday were, PFI chairman O M A Salam, national secretary Nasaruddin Elamaram and Kerala unit president C P Mohammed Basheer.

Both the nodal investigating agencies, the NIA and the ED, claimed that the arrests were related to conducting terror training camps, linkage with global terror outfits and also sponsoring terrorist acts that intended attacks against civilian targets on Indian soil. The arrests that were conducted across 11 Indian states are seen to be a culmination of what transpired from late February 2007 till recent times, with the PFI gaining notoriety for the violence and murder of several persons from the Rashtriya Swayamsevak Sangh and the Communist Party of India -Marxist cadres.

The law enforcing authorities, who took part in the crackdown, however, admitted that since there was no formal membership for PFI, it became difficult to establish the identity or links of those related to PFI’s alleged terror activities. The latest round of allegations levelled against PFI included attempts to radicalize and indoctrinate youth by resorting to forcible conversions and also communalisation that targeted hatred against other communities.

A major controversy surrounded PFI when the Congress-run state government petitioned the Kerala High Court to impose a ban on the organization. They also have a student wing and political wing named the Social Democratic Party of India (SDPI). It was learnt that in more recent local elections of Dakshin Kannada and Udipi areas of Karnataka, the SDPI gained a lot of ground in garnering seats from the civic bodies.

Today, Assam chief minister Himanta Biswa Sarma said today that his state always asked the Centre to ban PFI, and Karnataka Home Minister Araga Jnanendra stated that the procedure to impose a ban on the PFI had begun. The All India Bar Association (AIBA) too sought a ban on the PFI in the face for its involvement in terror activities.

Ever since the BJP government was installed at the Centre there have been concerted attempts to brand PFI as a new form of the banned Students Islamic Movement of India (SIMI). Intelligence input indicates that PFI has got a link with the banned Islamic outfit, SIMI and that former SIMI office bearers are now holding key positions in the organization. The organization that is predominantly south-based is reported to have witnessed a spillover from Karnataka’s Muslim-infested pockets into the borders of Kerala’s Palakkad district. The PFI’s presence in Kerala for over a decade-and-a-half has witnessed a trail of murder, rioting, intimidation and supporting an alliance with terror outfits in the Islamic world.

The PFI on its part has alleged being victimized and harassed by people owing allegiance to the mainstream political parties and has also vehemently denied any involvement in terror activities or incidences of violence. While the allegations against PFI’s acts of perpetuating religious terror peaked earlier this year in April, the organization blamed the BJP-RSS cadres for the murder of its Palakkad district’s area president A Subair. The spate of allegations and counter-allegations between the rightwing and their Islamic counterparts has been on the rise over the years with a loud intensifying cry that seeks to ban PFI.