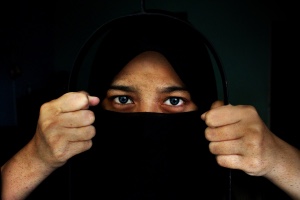 Bengaluru: The row over ban on entry to students wearing hijabs in a college in Udupi district escalated as seven students held a protest at the college gates with placards today.

The students said a ban  on wearing a hijab  violated their fundamental right. They also said that they feel uncomfortable without wearing a hijab while facing male lecturers.

The fresh protests erupted after college authorities and district officials gave the students an ultimatum to either fall in line with the dress code or go home.

The protests also followed the comments made by Education Minister BC Nagesh who told a TV channel that the protests amounted to “indiscipline” and that schools and colleges were “not a place to practice dharma”.

He also indirectly accused the PFI-associated Campus Front of India of politicising the issue ahead of the 2023 Assembly election, and demanded to know why the students “want to practice constitutional rights now”.

He pointed out that the dress code had been in place since 1985 and that these protests only erupted 15-20 days ago, and claimed over 100 Muslim students in the same college had no issues and “only these students don’t want to follow (the dress code)… School is not a place to practice dharma”.