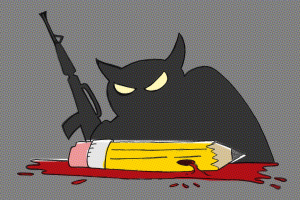 Islamabad/Geneva: Iftikhar Ahmed (55) becomes the 4th Pakistani and 74th journalist to be killed this year, whereas globally 79 media persons lost their lives to assailants in the entire year of 2021.

Associated with Pakistan’s influential Express Media Group for many years, the journalist was shot dead in his own Shabqadar locality of Khyber-Pakhtunkhwa on July 2, 2022.

“We are appalled by a large number of journalists killed this year which is 100% compared to 36 deaths in the same period last year. The war in Ukraine and the rampant criminality in Mexico are the main reasons for this alarming deterioration. All these crimes must be fully investigated with no impunity to the culprits,” said Blaise Lempen, president of Press Emblem Campaign (PEC), the Geneva-based global media safety and rights body.

PEC today demanded adequate punishment for perpetrators who were involved in the murder of Ahmed.

Meanwhile, in Ukraine, the conflict triggered by Russia has claimed 30 victims among media workers, 16 in the line of duty and 14 journalists killed in fighting as soldiers or volunteers in the army. Mexico witnessed 13 media victims so far which exceeds the total figure for 2021 (10 killed). Haiti and Yemen lost 3 journalists each. PEC recorded 2 victims in Bangladesh, Brazil, Honduras, Israel/Palestine and the Philippines, and 1 victim in Myanmar, Turkey, Chad, Chile, Guatemala, Kazakhstan and the United States.

PEC’s south Asia representative Nava Thakuria informed that Bangladesh lost Mohiuddin Sarker Nayeem and Abdul Bari, while Myanmar witnessed the death of Pu Tui Dim in military atrocities. The entire region continues to be hazardous for working journalists, where the scribes are being targeted with impunity. Besides the killings, more journalists have been facing legal and illegal atrocities from the State and non-State actors, he added.