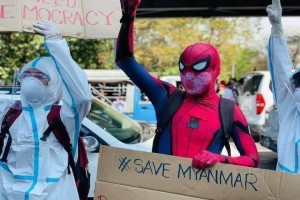 Yangon/New York: At the backdrop of  widespread protests that returned to streets today, February 10, 2021 for the second day in succession against the military coup in Myanmar and use of force against the protesters, the global community has united to send a stringent warning to the country’s new military junta that the use of disproportionate force against demonstrators was unacceptable. New Zealand has already suspended its political and military ties with Myanmar, while the U.S. State Department was reviewing assistance to the country.

Amnesty International reported that tens of thousands took to the streets across many cities in Myanmar yesterday, including Nay Pyi Taw and the country’s two largest cities, Yangon and Mandalay.

In yesterday’s street demonstrations, a woman was hit by a bullet on head and was fighting for her life after police fired guns, mostly in the air, to clear protesters in capital Naypyitaw. Police also used rubber bullets and water cannon on protestors in Mandalay and other cities and there were reports that several protestors were injured in police action.

This is happening in Myanmar.WE protest peacefully. But since the morning the police said to break the crowd of peaceful protesters.They afraid that our crowd is bigger and bigger day by day and they don’t want world know what is true.#Feb9Coup pic.twitter.com/RK5vmMJG78

The Assistance Association for Political Prisoners feared arrests of nearly 60 people in different parts of the country yesterday. Reports suggested that the protests were the largest on Myanmar streets for more than a decade, and Amnesty International said that as feared, the authorities in the country seemed to be now using unnecessary and excessive force.

In New York,  Stéphane Dujarric, Spokesman for the Secretary-General, told reporters last night (IST) that the use of excessive force, disproportionate force, was unacceptable.  “We’re very concerned about the reports that we’ve seen, about what our colleagues on the ground have seen, what we’ve seen just watching the news.  People have a right to demonstrate.  They have a right to demonstrate peacefully, and that is in Myanmar and anywhere else.  The message is very clear, is that we need to see a return to the democratic process.  We need to see the will of the people of Myanmar respected and a return to the situation as it was more than a week ago,” he said. He added: “The situation as it is now just makes our work, our ability to access those people who need help, that much more challenging.”

Responding to specific questions on whether the UN had an access to the sensitive Rakhine State and whether it planned a special mission to assess the situation of Rohingyas after the events, Dujarric referred to the fact that UN’s humanitarian access was always a bit challenging in Rakhine State before.  “It is now even more challenging.  We are doing whatever we can, under these current conditions, to continue life‑saving humanitarian work, wherever it is needed in Myanmar.  And we will continue to do so.”

The Secretary-General’s spokesperson stated that it was clear that the upheaval will have a negative impact and was having a negative impact on UN’s ability to do its work and, more importantly, on those in Myanmar who depend on humanitarian aid.  “I think there are about a million people that depend on humanitarian aid in Myanmar.  What is going on now is only making their life worse, and that’s just yet another reason why we need to see the events reversed,” he said.

The UN Resident and Humanitarian Coordinator, Ola Almgren, called on the security forces to respect human rights and fundamental freedoms, including the right to peaceful assembly and freedom of expression.  He stressed that the use of disproportionate force against demonstrators is unacceptable.  Almgren also reiterated the Secretary-General’s recent statement in which he urged the military leadership to respect the will of the people of Myanmar and adhere to democratic norms, with any differences to be resolved through peaceful dialogue.

For its part, the UN Children’s Fund (UNICEF) in Myanmar too expressed its deep concern at the impact of the ongoing crisis on the well‑being of children.  “UNICEF also reminds all parties of their obligations to uphold children’s rights as enshrined in the Convention on the Rights of the Child, to which Myanmar is a State party, and under the Myanmar Child Rights Law enacted in July 2019,” it stated.  In the context of ongoing demonstrations and current events, UNICEF called on all parties, including security forces, to exercise the utmost restraint, to resolve differences through constructive and peaceful means and to prioritize the protection and safety of children as they express their opinions.

It may be mentioned that the United Nations Secretary‑General, António Guterres, who in the past had made a number of visits to Myanmar as High Commissioner for Refugees, was very well versed about the situation in the country, and Dujarric said  he will continue to speak out based on the universal principles that are found in the Charter and the Declaration of Human Rights. “He (Guterres) has been extremely clear, extremely vocal and extremely precise in his messaging on Myanmar since the start of this crisis, and he will continue to do so.  Should things get even worse, he will also continue to do so,” he asserted.