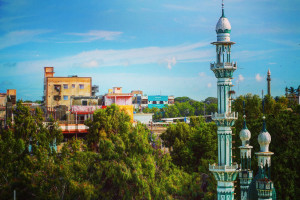 Karachi/Geneva: A television journalist, Athar Mateen, was shot dead during the morning hours in Karachi on February 18, 2022. Associated with the private news channel Samaa Television, Mateen (45) was targeted by two armed men at the Nazimabad area of the port city in west Pakistan. He tried to prevent them from robbing a pedestrian on the street. The men on a bike opened fire on Mateen and fled from the location. Wounded Mateen was taken to a nearby hospital where he succumbed to injuries.

Mateen, who worked as a senior news producer, was also partially associated with Aaj News and ARY News. Besides the Pak media fraternity, Prime Minister Imran Khan, Sindh Governor Imran Ismail and State chief minister Murad Ali Shah also condemned the incident and directed the police to nab the culprits at the earliest to punish under the law.

Expressing grief over the demise of Karachi-based Pakistani television journalist Athar Mateen, the global media safety and rights body Press Emblem Campaign today insisted on a genuine probe into the incident that led to his killing during the morning hours on 18 February 2022. PEC also demands compensation to the bereaved family.

“It’s shocking that Pakistan has lost three scribes this year and emerged as a dangerous country for working journalists. Earlier, the Lahore-based journalist Hasnain Shah (45) was killed on 24 January by two bike riders outside the local press club. It was followed by another assassination of scribes when Ghulam Murtaza Shar (32) faced bullets from two armed men riding a two-wheeler in Sindh province on 30 January,” said Blaise Lempen, secretary-general of PEC.