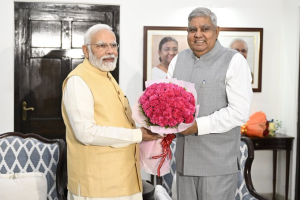 New Delhi: Former West Bengal governor Jagdeep Dhankar will be the next Vice President of India. He, as a National Democratic Alliance candidate, won the vice presidential election today by securing 528 votes. His rival Margaret Alva, who was fielded by a combined Opposition, could secure 182 votes.

The polling began at 10 am and continued till 5 pm at Parliament House in New Delhi today. The Returning Officer for Vice Presidential polls and Secretary General of Lok Sabha Utpal Kumar Singh said that while the Electoral College consisted of 233 elected members of Rajya Sabha, 12 nominated members of Rajya Sabha, and 543 elected members of Lok Sabha, adding up to 788 members, 725 MPs cast their vote which is 92.94% of the total votes.  He said that 15 votes were declared invalid, while eight seats are vacant in Rajya Sabha.

The All India Trinamool Congress MPs Shishir Adhikari and Dibyendu Adhikari defied the party’s call to abstain from polling and cast their votes. The rest of the 34 AITC MPs did not cast their votes. Besides, BJP members Sunny Deol and Sanjay Dhotre did not vote due to health reasons.

“I thank all those MPs who have voted for Shri Jagdeep Dhankhar Ji. At a time when India marks Azadi Ka Amrit Mahotsav, we are proud to be having a Kisan Putra Vice President who has excellent legal knowledge and intellectual prowess. @jdhankhar1″.