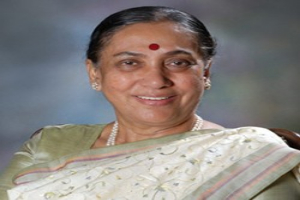 New Delhi: Former Union Minister and Governor, Margaret Alva, who is a veteran Congress leader, is set to be the Opposition’s joint Vice Presidential candidate.

80-year-old Alva will be filing her nomination on Tuesday, July 19, 2022 – the last day for filing nominations. She is supported by 17 Opposition parties unanimously, the Nationalist Congress Party chief Sharad Pawar, said today. The Vice Presidential election would be held on August 6, 2022.

Margaret Alva is pitted against the ruling Bharatiya Janata Party-led National Democratic Alliance’s Jagdeep Dhankar, who is presently the Governor of West Bengal. It may be mentioned that out of the Parliament’s current strength of 780, the BJP alone has 394 MPs, which is more than the majority mark.

The Opposition leaders finalised Alva’s name after a meeting held at the residence of Pawar, attended by all major opposition parties including the Congress Party, the Samajwadi Party, and the Rashtriya Janata Dal, the Trinamool Congress, the Communist Party of India – Marxist, and others. Pawar said that they are contacting Mamata Bannerjee and Arvind Kejriwal as both had already supported their joint Presidential candidate Yashwant Sinha. Alva tweeted “it is a privilege and an honour to be nominated as the candidate of the joint Opposition for the post of Vice President. I accept this nomination with great humility and thank the leaders of the Opposition for their faith in me”.

Margaret Alva hails from Mangalore in Karnataka. She has wide political, administrative and parliamentary experience as she was a member of the Rajya Sabha for four terms ( 24 years). She also was a Lok Sabha member once. She worked as a Union Minister under Prime Ministers Indira Gandhi, Rajiv Gandhi and PV Narasimha Rao. Later, she also served as Governor of Goa, Gujarat, Rajasthan and Uttarakhand. Her father PA Nazareth belonged to the Indian Civil Service and her mother-in-law, Violet Alwa, was the deputy chairperson of the Rajya Sabha in the 1960s.

The Opposition earlier said that they would decide on their candidate only after the NDA announces its candidate. The Opposition wanted to ensure its candidate matches the stature and profile of the NDA nominee so that the votes do not become one-sided as it seems to be happening with the Presidential race as Draupadi Murmu’s credentials as a tribal and a woman have made parties from the rival camp switch sides.

With the Monsoon Session of the Parliament commencing tomorrow, an all-party meeting called by the Government today turned out to be aggressive with the Opposition demanding discussion on 13 prominent issues including the attacks on Kashmiri pandits and Chinese incursion. The Session will provide a total of 18 sittings spread over a period of 26 days.

The Government on the other hand said that they are open to discussion. Parliamentary Affairs Minister Pralhad Joshi said that an all-party meeting has been convened again tomorrow to discuss the issue of Sri Lanka where the Minister of External Affairs will be present.

Thirty-five parties were present in the meeting, and Joshi said that the Government is always ready to discuss on the floor of the House, any issue as permitted under the Rules of Procedure by respective Presiding Officers. He also requested all party leaders for active cooperation and support for the smooth functioning of the two Houses of Parliament.

If the Opposition took up 13 issues in the meeting, the Government wanted to pass 32 bills, the leader of the opposition in Rajya Sabha, Mallikarjun Kharge said. Joshi said that for this session, out of the tentatively 32 legislative items, 14 items had already been finalized.

Today, at the meeting, sources said the Aam Aadmi Party raised the issue of Delhi Chief Minister Arvind Kejriwal’s Singapore visit, saying that the Lieutenant Governor of Delhi was not clearing the file. The Congress general secretary Jairam Ramesh today took strong objection to the absence of Prime Minister Narendra Modi at the meeting.

As many as 24 new bills will be introduced in the monsoon session, including the Press and Registration of Periodicals Bill, 2022. “The Bill seeks to replace the Press and Registration of Books (PRB) Act, 1867 by the decriminalisation of existing Act, keeping the procedures of that extant Act simple from the viewpoint of medium/small publishers and uphold the values of Press Freedom.” The Bill may see stiff opposition as it is said that it is being brought to control the small publishers and digital media. The Opposition has already alleged that the Government is trying to stifle the voice of dissent in the country.

Another important Bill is the Energy Conservation (Amendment )Bill, 2022, which seeks to provide a regulatory framework for Carbon Trading in India to encourage penetration of renewables in the energy mix, and effective implementation and enforcement of the Energy Conservation Act. Four other Bills have been referred to the parliamentary standing committee. Wild Life (Protection) Amendment Bill, 2021; Anti-Maritime Piracy Bill, 2019; Maintenance and Welfare of Parents and Senior Citizens (Amendment) Bill, 2019; and National Anti-Doping Bill, 2021.

LIST OF BILLS LIKELY TO BE TAKEN UP DURING MONSOON SESSION, 2022