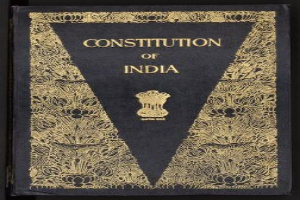 Gandhinagar:  The Opposition Parties’ Presidential candidate Yashwant Sinha today reiterated his claim that his rival and the Bharatiya Janata Party-National Democratic Alliance-led Presidential candidate Droupadi Murmu if gets elected, would be a “rubber stamp President” who would never try to save the Constitution. Sinha was speaking here in Gujarat’s capital today as part of his campaign for the July 18, 2022, Presidential election.

He made a blistering attack on Prime Minister Modi and his government, and claimed that the  Constitutional values and democratic institutions “are facing a threat in the country, and a ‘rubber stamp’ President will never be effective”.

Sinha sought the support of the Congress MLAs in Gujarat. He stressed that the contest between him and Murmu was not just about who becomes the next President. He said the “ battle has now turned into a much bigger battle. This is about whether that person will use his other rights to save the Constitution after becoming President. And it is obvious that a rubber stamp President will never try to do it”.

He added: “Today, Constitutional values and democratic institutions, including the press, are in danger. There is an undeclared emergency at present in the country. LK Advani and Atal Bihari Vajpayee once fought against emergency (Between 1975 and 1977) and also went to jail for that. Today their own party (BJP) has imposed an emergency in the country. This is ironic,”

Incidentally, Sinha, himself is a former BJP leader, who served as a union minister in the Vajpayee cabinet. As he gradually increases a scathing attack on the Bharatiya Janata Party-led government as well as on his rival Droupadi Murmu, sources in the BJP said the party is not letting the battle for the nation’s highest Constitutional post loose. The party has asked all its MPs to reach Delhi by July 16 and stay here till July 18 to ensure full attendance of all lawmakers for the Presidential election. On these two days, the party will organise a training and demonstration session on how to cast vote in the Presidential elections. BJP president JP Nadda will host a dinner meeting with all MPs on July 16.

Sinha, meanwhile, targeted Prime Minister Narendra Modi on his home turf and said that Modi is not speaking out about the recent incidents where two persons were killed for supporting suspended BJP leader Nupur Sharma. “ Two murders happened. Everyone, including me, condemned it. But neither the Prime Minister nor the Home Minister, Amit Shah uttered a word. They are silent because they want to keep such issues alive to get votes” Sinha alleged.

A tribal (Murmu) getting the top post in the country will not change the lives of tribal communities in India, he said. “It does not matter who comes from which caste or religion. The only thing that matters is who represents which ideology and this battle is between two different ideologies. though she was the governor of Jharkhand for Six years, it did not change the lives of the tribals there”, Sinha observed.

On Wednesday, July 6, 2022, there was a review meeting at the residence of NCP supremo Sharad Pawar on the progress of Yashwant Sinha’s Presidential campaign with several opposition leaders participating in it. It was discussed that Sinha’s visit to Hyderabad last week was a successful one. Sinha’s campaign coordinator and in charge Sudeendra Kulkarni briefed the details as to how many states were covered and how many more were left.

At the meeting, a special strategy was discussed to be adopted by Sinha for the remaining states where the campaign is due. Yesterday he was in Uttar Pradesh and today in Gujarat and tomorrow he is scheduled to be in Jammu and Kashmir. Next week, he would be visiting Bihar and Jharkhand. On  July 17, he would wind up his campaign in Mumbai. It was decided that Sinha should visit J&K despite there being no Assembly. To extend solidarity and support to the leaders of various Opposition party leaders as well as the people of J&K, it was decided he must visit, sources said.

On the other side, the NDA candidate Droupadi Murmu is undertaking a hectic campaign by crisscrossing the country with the full support of BJP governments in various states, and as many states as possible. On July 6, she toured Arunachal Pradesh, Meghalaya and Nagaland. she appealed to the MPs and MLAs to vote for her. She got a huge reception at Itanagar by Chief Minister Pemakhandu, State BJP chief Biyuram Vaghe and others. She met Arunachal Pradesh Governor, BD Mishra. In Meghalaya also, CM Conroe Sangma extended full support to her, and in Nagaland too she received overwhelming support.

Murmu will visit Gujarat on July 13, as part of her campaign among the MPs and MLAs to cast their votes. She would visit Sabarmati Ashram and the tribal areas in Gujarat as well as the Statue of Unity in the State. The Yuvajana Shramika Rythu Congress Party led by Jagan Mohan Reddy in Andhra Pradesh, as well as Naveen Patnaik of Biju Janata Dal in Odisha have already decided to extend support to Murmu. Political observers say that it would be a comfortable victory for her.

1 thought on ““Murmu would never try to save the Constitution,” says Yashwant Sinha”