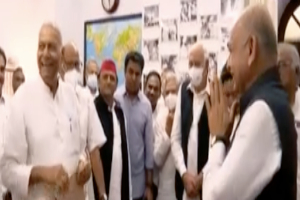 Yashwant Sinha will now begin his campaign to meet MPs and MLAs. In fact, on Friday, June 24, Sinha telephoned Prime Minister Narendra Modi’s and Defence Minister Rajnath Singh’s offices seeking their support for the poll. He also wrote a letter to all the leaders of the Opposition parties seeking their support for his candidature. In the letter, Sinha wrote, “ India is going through extremely difficult times. I shall raise my voice for the common people”. Sinha had also said that the leaders of other ideologies are intent on throttling the Constitution and “ making a mockery of the people’s mandate in elections.” Sinha also made it clear that he is not even asking his son, Jayanth Sinha, a BJP Lok Sabha member, to vote for him. He said his fight is against authoritarianism.

After filing nominations, leaders of several opposition parties said that the presidential election is a fight between two ideologies and termed it authoritarianism versus democracy contest. Describing the election as a fight between communalism and secularism, they said it was not about individuals.

Congress leader Rahul Gandhi said the real fight is between the “hatred of the RSS [Rashtriya Swayamsevak Sangh]” on the one side and the “compassion” of all Opposition parties on the other. Trinamul Congress leader Saugata Roy said, his leader Mamata had extended her full support to Sinha, who is a joint opposition candidate.

Several party leaders said under the circumstances Sinha was the best candidate with wide administrative and political experience since he was not only a former IAS officer but was a former Union Finance and External Affairs minister as well. On behalf of the Left parties, Yechuri said that it was not a question of identity politics. “We respect Droupadi Murmu ji, but it is a contest of ideologies”, the CPI-M leader said.

In a fresh development, the ruling TRS in Telangana led by K Chandrasekhar Rao decided to back Yashwant Sinha in the polls. Earlier the TRS was wavering and wanted to maintain equidistance from BJP and Congress and wanted to abstain from presidential polls. Today at the time of filing the nomination, KCR’s son Kalvakuntla Taraka Rama Rao was present and met Yashwant Sinha and extended full support. KCR’s party has nine members in Lok Sabha and seven in Rajya Sabha. Besides, it has 102 out of 119 seats in the Telangana State Assembly. The total value of TRS’s votes works out to around 31,000 —roughly 3% of the total 10.98 lake odd votes in the electoral college.

On the other, the Jharkhand Mukti Morcha (JMM) is still in a dilemma as to whom to support in the polls. The JMM leaders said that there is a scheduled meeting today between Chief Minister Hemant Soren and Home Minister Amit Shah on this issue. Based on the outcome of these talks, the JMM would decide whom to support. It may be recalled that JMM failed to reach a consensus on Murmu or Sinha at their legislative party meeting on June 25.

The last date for filing nominations for the presidential elections ends on June 29, followed by scrutiny on June 30. Both Murmu and Sinha are giving the final touches to their tour programme for their campaign across the country. Murmu would be starting her campaign on July 1 and she may start her campaign in a tribal-dominated state.

Interestingly, in this election, there are already 30 individuals from various states, who filed their nomination papers for the presidential election. Among them include one professor from Delhi, Daya Shankar Agarwal; Sanjay Dash Pande, (who lives in slum areas of Mumbai); Laloo Prasad Yadav from Saran district of Bihar (not former Bihar CM and Rashtriya Janata Dal leader Laloo Yadav); a social activist from Tamil Nadu, T Ramesh. These nominations papers are said to be —- “not in order” ….Neither the signatures of MPs\MLAs were there….nor the Rs 15,000 security bank draft was attached.