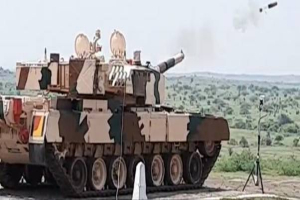 The test-fire was supported by the Armoured Corps Centre & School (ACC&S) Ahmednagar.

In the test, the ATGM hit the bull’s eye with textbook precision and successfully defeated the target at minimum ranges. Telemetry systems recorded the satisfactory flight performance of the missile.

Engaging the targets at lower ranges is a challenge due to the dimensional constraints of tank-launched ATGMs, which has been successfully accomplished by the ATGM for MBT Arjun. With the trial, the ATGM’s capability to engage targets from minimum to maximum range has been established. Earlier the trials have been successful for maximum range.

Defence Minister Rajnath Singh congratulated DRDO and the Indian Army for the successful trial of the Laser Guided ATGM.

Secretary, Department of Defence R&D and Chairman DRDO Dr G Satheesh Reddy stated that the successful development of laser-guided ATGM will enhance the firepower of the MBT Arjun.