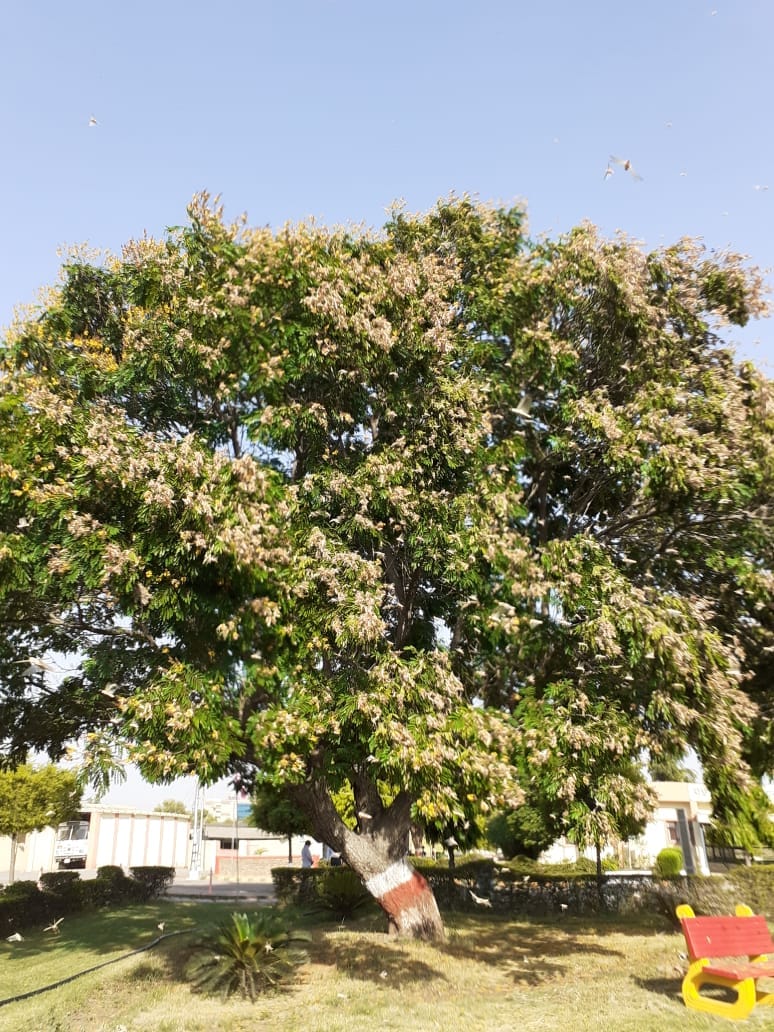 New Delhi: The Department of Agriculture and Farmers’ Welfare (DAC&FW) has stepped up locust control operations in the affected States of Rajasthan, Punjab, Gujarat and Madhya Pradesh. It has identified regions swept across by a wave of locust swarms. “There are active swarms of immature locust in Barmer, Jodhpur, Nagaur, Bikaner, Ganganagar, Hanumangarh, Sikar, Jaipur Districts in Rajasthan and Satna, Gwalior, Seedhi, Rajgarh, Baitul, Devas, Agar and Malwa district of Madhya Pradesh,” it stated on Wednesday night.

On the measures taken so far, it said till May 26,  21 districts in Rajasthan,  18 districts in Madhya Pradesh,  one district in Punjab and  2 districts in Gujarat had undertaken Locust control measures. “For effective control of locusts beyond Scheduled Desert Areas, temporary control camps have been established in Ajmer, Chittorgarh and Dausa in Rajasthan; Mandsaur, Ujjain and Shivpuri in Madhya Pradesh and Jhansi in Uttar Pradesh,” it stated.

Providing further details, the Department said control operations against Locusts had been done in 47,308 hectare area in total 303 places in Rajasthan, Punjab, Gujarat and Madhya Pradesh by LCOs in coordination with District Administration and State Agriculture Department. 89 fire brigades for pesticide spray; 120 survey vehicles; 47 control vehicles with spray equipments and 810 tractor mounted sprayers were also deployed for effective locust control, as per requirement during different days.Usually, the locust swarms enter the Scheduled Desert Area of India through Pakistan for summer breeding in the month of June-July with the advent of monsoon. This year, however the incursions of locust hoppers and pink swarms have been reported much earlier because of presence of residual population of Locusts in Pakistan which they couldn’t control last season. Since April 30, 2020, the incursion of pink immature adults were reported in bordering districts of Rajasthan and Punjab. Pink immature adults fly high and cover long distances during day hours from one place to another along with the westerly winds coming from the Pakistan side. Most of these pink immature adults settle on the trees during night and mostly fly during day.

Concerned over the early attack of locust swarms this year, the Union Minister for Agriculture & Farmers’ Welfare, Narendra Singh Tomar had chaired a meeting with the pesticide manufacturers and all related stakeholders on May 6 to review the preparedness for locust control in the affected States.  Thereupon, Locust awareness literature, SOPs, approved pesticides and awareness videos were shared with the affected states.

At present 200 Locust Circle Offices (LCO) are conducting survey and control operations in close coordination with District Administration and agriculture field machinery of the affected States. Currently Locust Control Offices have 21 Micronair and 26 Ulvamast (47 spray equipments) which are being utilized for locust control.

“On approval of the Agriculture Minister Shri Tomar, supply order for additional 60 sprayers has been placed to M/s. Micron, United Kingdom. e-Tender has been invited for the empanelling agencies to provide services of drones for aerial spraying of insecticides for effective control over tall trees and inaccessible areas,” DAC&FW stated.

Ministry of Civil Aviation too had  approved “Conditional exemption to Government entity (DPPQS) for use of Remotely Piloted Aircraft System for anti-locust operations” on  May 21, and in accordance with this order,  two firms were entrusted with the task of using  drones for spray of pesticides for Locust control.

Meanwhile,DAC&FW said supply order for procurement of additional 55 vehicles has been placed to strengthen the control potential. “Adequate stock of Pesticide is being maintained (53,000 litres Malathion) with Locust Control Organizations. Under Sub-mission on Agriculture Mechanization, assistance for 800 tractors mounted spray equipments has been sanctioned for Rajasthan costing Rs. 2.86 crores,” it said.  Besides, it mentioned that  under Rashtriya Krishi Vikas Yojana sanction for hiring of vehicles, tractors and for purchase of pesticides has been issued for Rajasthan worth Rs. 14 crores, and sanction for purchase of vehicles, spray equipments, safety uniform, android application and training has been issued for Gujarat at a cost of Rs. 1.80 crores.

On 11th March, 2020 a High- Level virtual meeting on Desert Locust in South-West Asian countries was held at the office of the FAO representative in India. Representatives of four member countries (Afghanistan, India, Iran and Pakistan) and the Plant Protection Division of FAO, Rome also participated in the meeting.

Locust control operations are in full swing in coordination with State Agriculture Departments and Local Administration.

Following directions of the Agriculture Minister Shri Tomar, a video conference was conducted under the chairmanship of Secretary (DAC&FW) Shri Sanjay Agarwal was conducted on 22nd May, 2020 with the District Administration and District Agriculture Officers of locust threatened districts of Punjab, Rajasthan, Gujarat, Madhya Pradesh and Uttar Pradesh along with the representatives of NDMA.  in the meeting. Earlier, a video Conference was held on 5th May, 2020 with the Principal Secretary (Agriculture) and DMs of the locust prone districts of Rajasthan, Gujarat and Punjab under the chairmanship of Secretary, DAC&FW to review the preparedness and further coordination with the locust States for taking necessary action.

The MoS (Agriculture & FW) Shri Kailash Choudhury and Secretary DAC&FW attended the meeting. It was decided to hold the virtual meetings of technical officers of member countries every Monday via Skype and nine meetings have so far been held.

During 2019-20, India witnessed a massive locust attack which was successfully controlled. Starting from 21st May, 2019 till 17th February 2020, a total of 4,03,488 ha area was treated and locust was controlled. Along with this, the State Agriculture Department of Rajasthan and Gujarat coordinated Locust control in cropped areas of the State. During 2019-20, Control operations were done in 3,93,933 ha area of  11 districts of Rajasthan; 9,505 ha area in 2 districts of Gujarat and 50 ha area in 1 district of Punjab. Senior Locust Forecasting Officer of FAO who visited India on 16-17 January 2019 also appreciated the efforts of India in Locust control.

Everyday Locust Control Organizations and District Authorities and State Agriculture Department officials with control spray vehicles of LCOs, tractor mounted with sprayers and fire tenders, are undertaking Locust control operations in early morning hours. The immature locust is very active and their mobility makes it difficult to control the swarm at one location and it takes 4 to 5 days of control at different locations to control a particular locust swarm.

Locust is an omnivorous and migratory pest and has the ability to fly hundreds of kilometers collectively. It is a trans-border pest and attacks the crop in large swarm. Found in Africa, the Middle East and Asia, they inhabit some 60 countries and can cover one-fifth of Earth’s land surface. Desert locust plagues may threaten the economic livelihood of one-tenth of the world’s human population. Swarms of locusts in the desert come to India from Africa/ Gulf/ South West Asia during the summer monsoon season and go back towards Iran, Gulf & African countries for spring breeding.