Geneva: Trade growth is likely to slow in the closing months of 2022 and into 2023, according to the latest WTO Goods Trade Barometer released today, as the global economy continues to be buffeted by strong c. The current reading of 96.2 is below both the baseline value for the index and the previous reading of 100.0, reflecting the cooling demand for traded goods. 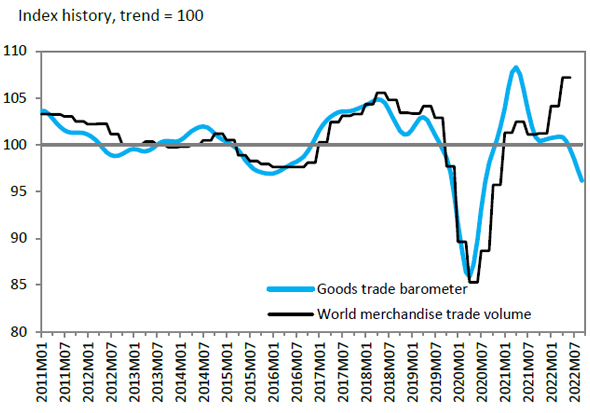 The Goods Trade Barometer is a composite leading indicator for world trade, providing real-time information on the trajectory of merchandise trade relative to recent trends. Values greater than 100 signal above-trend expansion while values less than 100 indicate below-trend growth. The barometer index (represented by the blue line above) has fallen below the merchandise trade volume index (the black line), which shows actual trade developments through the second quarter. The latter should eventually follow the barometer index down once quarterly trade statistics for the second half of 2022 are available. Recent divergence between the indices, as seen in 2021 and 2022, could be explained by delayed shipments of goods stemming from supply chain disruptions since the pandemic.

The downturn in the goods barometer is consistent with the WTO’s trade forecast of 5 October, which predicted merchandise trade volume growth of 3.5% in 2022 and 1.0% in 2023 due to several related shocks including the war in Ukraine, high energy prices, and monetary tightening in major economies. 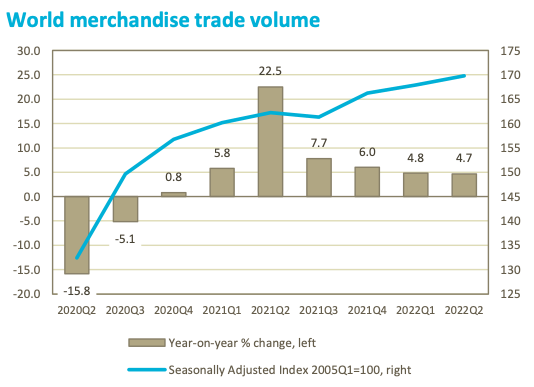 World merchandise trade volume growth continued to slow in the second quarter of 2022, with a 4.7% year‐on‐year increase similar to the 4.8% rise in the first quarter. According to the WTO’s latest forecast, world trade is expected to decelerate further in the second half of 2022 and remain subdued in 2023 due to several related shocks, including the war in Ukraine, high energy prices, inflation, and monetary tightening in major economies.

For the forecast to be realised, trade growth would have to average around 2.4% year-on-year in the second half of 2022.

The barometer index was weighed down by negative readings in sub-indices representing export orders (91.7), air freight (93.3) and electronic components (91.0). Together, these suggest cooling business sentiment and weaker global import demand. The container shipping (99.3) and raw materials (97.6) indices finished only slightly below the trend but have lost momentum. The main exception is the automotive products index (103.8), which rose above the trend due to stronger vehicle sales in the United States and increased exports from Japan as supply conditions improved and as the yen continued to depreciate.