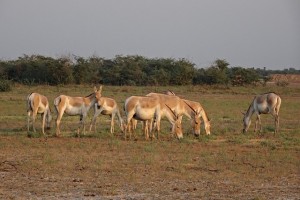 The increase in the wild asses population by 1,631 in the last six years is the highest jump ever

Ahmedabad: After announcing a jump in the population of Asiatic Lions, the Gujarat forest department has another good news to share with the wildlife lovers. Almost from the brink of extinction some five decades ago, the number of Indian wild asses in its only habitat in the Little Rann of Kutch in the state, has gone up to over 6,000.

The wild ass census is carried out every six years. This year the census operation was completed in March but the lockdown later that month due to Corona pandemic, delayed announcing the results which was released now. According to the latest census, the wild asses population was recorded at 6,082, up by 37 per cent from 4,451 counted in 2014.

According to some wildlife experts, the wild asses population around the sixties was estimated at over 2,000 but some fatal diseases called Surra and South African Horse Sickness took the species to near extinction. In the first wild asses census carried out in 1969, the population of the species in the Little Rann was found at mere 362. From then on, a number of conservation processes devised by the state government as it did to save the Asiatic Lions, the wild asses population too has started rising.

Only in June, Prime Minister Narendra Modi had personally announced the most heartening news of the estimated 29 per cent jump in the population of Asiatic Lions in the Gir sanctuary. Though the official census operation of the lions due in May this year had to be called off due to lockdown, the forest department had carried out a detailed counting of lion heads by sighting on the full moon nights, the estimated results of which was announced by the prime minister.

According to the estimate, the Asiatic lion population at its only abode in Gir has gone up from 425 in 2015 to 674 at present, including 161 males, 260 females, 116 sub-adult lions and 137 cubs. The total area where the lions are seen bursting out of the sanctuary limits, has also gone up from 22,000 square kilometres to over 30,000 square kilometres as increasing population has forced the lion males to look out for newer areas for their groups.

Like the Asiatic Lions, Gujarat, more particularly the Saurashtra region, is also the exclusive home for the Indian Wild Asses found in over 15,000 square kilometres area in the Little Rann of Kutch spread over six revenue districts in the state including Kutch. According to the census reports, the wild asses population included 1.039 males, 3003 females, 559 foals and another 1,481 animals where the sexes were unclear. Besides Kutch, a large number of wild asses were found in the Little Rann falling in Surendranagar district while the animals have also been spotted in the neighbouring Morbi, Banaskantha, Patan and even
Ahmedabad districts, particularly near the bird sanctuary at Nalsarovar and Viramgam.

In terms of absolute numbers, the increase in the wild asses population by 1,631 in the last six years was the highest jump ever. The population had increased by about 36 per cent in the nine years from 1990 to 1999 too, but in terms of absolute numbers the increase then was from 2,075 to 2,839. The wild life experts have recommended more conservation measures to help the species to grow, particularly on the face of the threats the animals face from the dogs in the sanctuary peripheral areas and a few reared by the Agarias, the salt pan workers, living in the villages located in the Rann who keep the dogs as protection against attacks by the wild asses. The forest department has found nearly 800 dogs, including about 390 inside the wild ass sanctuary itself, the official sources said.

2 thoughts on “From brink of extinction, number of wild asses rises to 6000 in the Rann”