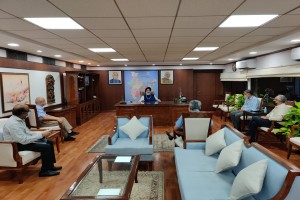 Kozhikode/New Delhi:  The death toll in Karipur air crash here rose to 18 on Saturday. The state government said currently 149 people were in various hospitals out of which 14 were in critical condition.

Civil Aviation Minister Hardeep Singh Puri who visited the crash site and hospitals on Saturday, announced an interim relief of Rs 10 lakh for the family of each of those who died, Rs 2 lakh each for those who suffered serious injuries and Rs 50,000 for those who suffered minor injuries. He informed that an enquiry has been ordered under Aircraft Act, and black boxes of flight IX-1344 had been recovered. He said that findings of this investigation will be made public.

In face of growing criticism by Opposition leaders, the minister in a series of tweets asked all to exercise patience and refrain from making speculative observations bordering on the irresponsible. “Again to emphasize, all the issues were addressed and rectified,” he claimed. “We often find ourselves placed in circumstances, the response to which defines us. Some of my colleagues in the political system have raised queries regarding Kozhikode air accident without ascertaining facts,” he tweeted.

Earlier, Congress MP from the state, Shashi Tharoor had taken to his twitter handle to allege that warnings had been given about “dangers of landing in heavy rain w/a tailwind, on a slippery runway w/rubber debris, poor runway lighting and no ground arrestor”. He claimed  that the Airport Authority of India officials “knew was an accident waiting to happen,” and asked why didn’t it take action?

Puri stated that Kozikhode Airport had a total footfall of 3.2 million passengers per annum with 70-80 aircraft movement per day.  “The total wide-body operations were only 4% of the total,” he tweeted.

The minister later on Saturday evening again tweeted about his discussions with senior officials including the Aviation Secretary, Chairman of Airports Authority of India, Director-General of Directorate General of Civil Aviation, and the Aircraft Accident Investigation Bureau (AAIB) “to take stock of the situation arising due to the accident in Kozhikode”.

Sources say that the AAIB, which was set up in 2012, may be given the task of investigating the crash for the first time as there were no such crash in the country since 2010.

In the other tragedy which hit Kerala on Friday, the death toll in the landslide in Idukki rose  to 24. Around 50 more bodies were feared buried in mud.