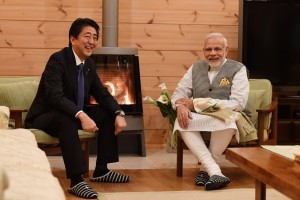 This unexpected incident should not be linked to China-Japan relations, says Beijing

Tokyo/New Delhi/New York/Washington/Beijing/Moscow: Former Japanese Prime Minister Shinzo Abe, 67, who is the longest-serving prime minister in Japanese history, was assassinated today while addressing an election event in Nara in Western Japan ahead of the July 10, 2022 elections for the Upper House of the Japanese Parliament. Police suspect 41-year-old Tetsuya Yamagami to be the killer. Abe was shot twice and a bullet pierced his heart. Video footage showed that he collapsed on the street. He was airlifted to Nara Medical University Hospital where doctors said that he was bleeding profusely and that the bullet had hit the region close to the heart.

Japanese Prime Minister Kishida Fumio ordered enhanced security for Cabinet ministers and politicians following the fatal shooting of Abe. The Prime Minister and his Cabinet colleagues immediately rushed back to Tokyo from their respective campaign events after the shooting. He condemned the attack as “dastardly and barbaric”.

Condolences started pouring from across the globe as soon as the news of the death of Japan’s longest-serving Prime Minister who had stepped down in 2020 for health reasons,  spread. United Nations Secretary-General Antònio Guterres stated that he will always remember his collegiality and commitment to multilateralism.

India declared one-day national mourning on July 9, 2022, as a mark of respect for Abe Shinzo. Indian Prime Minister Narendra Modi, in a series of tweets, expressed shock and sadness and described Abe as one of his “dearest friends”, who was “a towering global statesman, an outstanding leader, and a remarkable administrator”. Modi said Abe dedicated his life to make Japan and the world a better place. “In the passing away of Mr Abe, Japan and the world have lost a great visionary. And, I have lost a dear friend,” he tweeted.

Paying his tributes to the departed leader, Modi said Abe energised the India-Japan relations and ensured that Japan was there side by side as “New India accelerates its growth”. He recalled that they had first met in 2007. “I had got to know him during my tenure as Gujarat CM and our friendship continued after I became PM. His sharp insights on economy and global affairs always made a deep impression on me,” he tweeted. He added, “As far as global leadership is concerned, Abe San was ahead of his times. The Quad, the ASEAN-led forums, the Indo Pacific Oceans Initiative, the Asia-Africa Growth Corridor and the Coalition for Disaster Resilient Infrastructure all benefited from his contributions.”

In Washington, the President of the United States of America, Joe Biden, said that as a mark of respect for the memory of Abe Shinzo, former Prime Minister of Japan, the US flag shall be flown at half-staff until sunset, July 10, 2022. Biden said Abe Shinzo was a proud servant of the Japanese people and a faithful friend to the United States. “He worked with American Presidents of both parties to deepen the alliance between our nations and advance a common vision for a free and open Indo-Pacific. Even at the moment he was attacked and killed, he was engaged in the work of democracy, to which he dedicated his life,” Biden said.

US Secretary of State Antony J.Blinken said Abe was a “global leader and unwavering ally and friend of the United States, whose vision of a Free and Open Indo-Pacific lifted our Alliance cooperation to new heights”.

In Moscow, Russian President Vladimir Putin described Abe as an “outstanding statesman who “accomplished a lot towards the development of good relations between our countries”. Putin said all those who knew him “will always retain the bright memory of this magnificent person in their hearts”.

Putin said, “We maintained regular contacts with Shinzo Abe, and his wonderful personal and professional qualities were in full evidence on these occasions.”