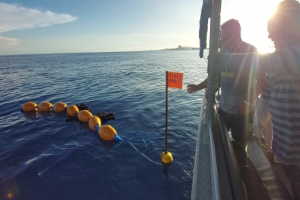 The Pacific region includes some of the world’s most remote countries whose coastal ecosystems are bearing the brunt of pollution, overfishing, marine degradation and climate change. In this International Year of Artisanal Fisheries and Aquaculture (IYAFA) 2022, FAO is bringing to light some of these challenges and celebrating the contribution of small-scale fishers, fish farmers and fish workers.

Funded by the government of Japan, FAO has introduced FishFAD which focuses on seven countries: Fiji, Kiribati, Palau, the Republic of Marshall Islands, Samoa, Tuvalu and Vanuatu. The project is named FishFAD after a technology central to this work, the fish aggregating device (FAD). The FAD is anchored to the sea floor with buoys on the surface to attract small pelagic fish such as mackerel and larger high-value fish like tuna that are not found closer to shore. FAO assists fishers in constructing this device on-shore before transporting it by boat and fixing it at a stable location up to 10 kilometres offshore.

Through this project in Fiji, one of the Pacific region’s Small Island Developing States (SIDS), fishers are learning how to access aquatic species further offshore and being given the skills and equipment they need to do it.

“The fishers are learning new types of fishing so they can fish in deep water,” says Mike Savins, FAO’s chief technical advisor for the project. He emphasizes that it’s not just about increasing catch diversity and numbers: “They also learn how to use the equipment and learn more about management, as well as how to add value to their fish processing techniques.”

It’s about building capacity and resilience as well as vital food security and nutrition since fish accounts for between 50 and 90 per cent of animal protein and provides key nutrients in the local diet.

As it is in many island states across the South Pacific, fishing is a means of survival in Fiji; it is embedded in the daily rituals of the people who live in the archipelago’s islands.

“I have been fishing all my life,” says Aviuta Ramoli. “Most of our resources come from the sea.”

Aviuta has fished in the spectacular turquoise waters surrounding his home for nearly seven decades. He now has six children, 24 grandchildren and 13 great-grandchildren.

But Aviuta and other fishers were finding it more difficult to find enough fish stocks close to shore and many are forced to travel long distances for fish to feed their families and generate income. Aviuta says an increase in unsustainable fishing means fewer fish grow to maturity, and there are fewer stocks available.

“When I first started fishing, there was very little commercial fishing, and we caught much bigger fish,” he says. “We still catch fish, but the size is much smaller, half of what we caught in the beginning.”

However, with the FishFAD project that provides skills and equipment to Fijian fishers, Savins says, fishers are now learning how to fish in deeper water with the right equipment to make their fishing efforts far more productive, so when they are trained they can continue to do it.

The provision of safety training and equipment is also a critical element of FishFAD, particularly as the fishers are pursuing their catch in deeper, more dangerous waters further offshore.

“FAD is a benefit to us because we know the fish are there all the time, day or night, whenever you go there to fish. You don’t waste your fuel going to the other side of the island,” Aviuta says.

“The Pacific has the highest fresh fish consumption rate in the world, so fish as a source of protein and micronutrients is extraordinarily important in this region,” says Nicole Franz, a Fisheries Officer for FAO. “It’s a really important focus for FAO, particularly during IYAFA, to help countries improve what’s happening to sustain those coastal fisheries and provide healthy protein and nutrition for SIDS communities.”

When the fishers return with their catch, local fish processors, who are usually women, clean, process, smoke, cure and dry the fish. The FishFAD initiative is also training these women, as well as fishers and fish workers, in post-harvest skills to help add value to their catches and increase their incomes. For example, fish workers are learning how to use previously discarded parts of the fish to make fish burgers, fish samosas and other products.

“We have learned a lot of things: the way to cut the fish, to fillet the fish,” says 66-year-old Ilisebeta Bau. “We learned how to use the fish head and the leftovers to make samosas and fish balls, and we can make money out of that.”

The timing of the FishFAD project is critical as SIDS face a more uncertain future. COVID-19 has disrupted tourism and other economic sectors in the past two years and climate shocks are increasing, taking a heavy toll on these vulnerable island states. Sea levels and temperatures are on the rise as are the number of cyclones in the Pacific region. Fiji was struck by three severe tropical cyclones in the past two years alone.

“In Melanesian and Polynesian countries, especially Vanuatu and Fiji, cyclones completely wipe out root crops and leaf crops,” says Savins. “But people can go out the day after the cyclone and catch fish so the FADs are an important tool for building resilience in emergencies.”

FishFAD is already making a difference to small-scale artisanal fishers, fish farmers and fish workers. In IYAFA 2022, FAO is committed to supporting fishers in their contribution to human well-being, healthy food systems and poverty eradication through the responsible and sustainable use of marine and natural resources.