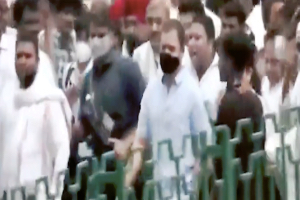 New Delhi: The Congress Party leader Rahul Gandhi was today questioned for almost nine hours by the Enforcement Directorate (ED) in a money-laundering case, linked to the National Herald newspaper, even as the Congress Party rallied behind him in a show of unity. Tomorrow also he is summoned by the ED.

The entire Congress Party came out on the streets today, with all the PCCs (Pradesh Congress Committees) in State Headquarters across the country, protesting to express their solidarity with Rahul Gandhi. Rahul’s questioning at the ED was aimed to record his statement under the prevention of money laundering Act. The probe pertains to alleged financial irregularities in the party prompted by Young Indian that owns National Herald Newspaper.

The All India Congress Committee (AICC) as well as PCCs with one voice in their protest termed the ED charges and the summons as “ political vendetta by the BJP [Bharatiya Janata Party]” and an attempt to defame the Gandhi family. Rahul was grilled by the ED for about three hours at the agency Headquarters and was again grilled after a lunch break. Braving Section 144 of the Code of Criminal Procedure that prohibits the assembly of four or more people in an area, Rahul marched from the AICC office to the ED office around 11 am along with a group of party leaders and supporters. Priyanka Vadra walked beside Rahul to the ED office. After his questioning by three officers, Rahul was allowed to leave for lunch around 2 pm.

It is learnt that during the break, Rahul visited his ailing mother Sonia Gandhi at Ganga Ram Hospital. He was accompanied by his sister Priyanka Gandhi Vadra.it is known that Sonia was admitted to the hospital due to COVID-related issues.

Sonia Gandhi too has been summoned by the ED on June 23, in the same case and the AICC hinted at an even bigger protest against the Narendra Modi government’s misuse of institutions. In fact, before Sonia’s date of appearance, today, a battery of senior congress leaders and several others courted arrest in protest against the summons. Among those include Mallikarjun Kharge, Ambika Soni, Digvijay Singh, Harish Rawat, Jairam Ramesh, K C Venugopal, Randeep Surjewala, youth congress chief B V Srinivas along with the respective Chief Ministers of Rajasthan and Chhattisgarh, Ashok Gehlot and Bhupesh Baghel.

Earlier in the day, the Congress leaders gathered at the AICC headquarters and planned the protest. Spokesperson Randeep Surjewala addressed the media. He said that in the entire country this is a “Satyagraha” for the truth and truth does not need any protection from anybody. Surjewala said that the Modi government has imposed an undeclared emergency in the entire central Delhi area. Thousands and hundreds of barricades have come up, thousands of Congress workers have been arrested since last night and the process is going on even today.

Not only in Delhi but also at various PCCs in state capitals, Congress leaders took to the streets, even as police heavily barricaded all places, and arrested them for violating the prohibitory orders. In view of barricading in central Delhi, Rahul Gandhi , who started from AICC, took a detour to reach the ED office. The BJP criticised the Congress’s ‘Satyagraha’ march and its leader Sambit Patra quipped that the Congress was celebrating “corruption”.

This is the first time that Rahul has appeared before a central-probe agency. Hundreds of party workers and leaders gathered at AICC and announced that they would march peacefully and if they are stopped, they would court arrest. As they were raising slogans on the way, they were stopped and arrested by the police who had put up barricades. Some workers mounted barricades. Hundreds of party workers were arrested on their way to the ED office.

Many party leaders felt that the way Rahul Gandhi received a huge welcome and solidarity from the cadres on his way to the ED office, only indicated that the leadership issue in the party has been settled. It is known that, time and again, since the defeat of the party in the 2019 Lok Sabha elections Rahul was under the scanner within the party, with many questioning his ability to lead.

vA senior leader said that the protests have shown that the Gandhis are still a big draw in the Congress system and any attempt to target them will provoke strong reactions. The protests were also an affirmation that the senior and junior leaders preferred the leadership to change the way it is getting public projection. It is felt that the summons had given an opportunity to the party to brace for street protests that they plan to stage over public issues in the coming months.