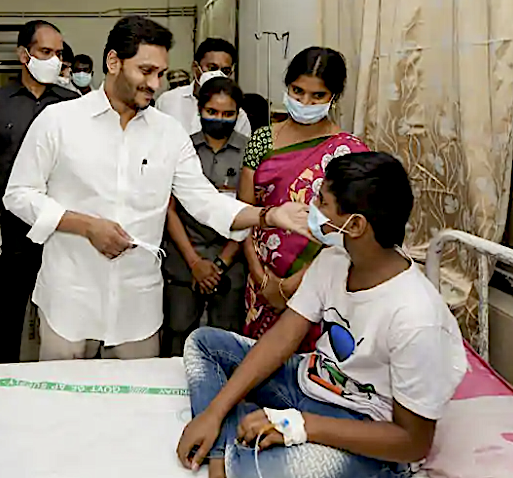 New Delhi:The Union Ministry of Health and Family Welfare is rushing a three-member team of medical experts to Eluru in Andhra Pradesh after scores of children were hospitalised with an undiagnosed illness in the past few days there.

Today Vice President M Venkaiah Naidu spoke to Union Health Minister Dr. Harsh Vardhan over reports of more than 300 children becoming ill, and asked him to extend all necessary help in diagnosing and providing treatment to the afflicted children.

Dr. Harsh Vardhan assured Naidu that all steps would be taken to find out the cause of the illness once the lab reports were received.

Before talking to the Health Minister, the Vice President spoke to the district collector for first hand information. Healso spoke to the Director, All India Institute of Medical Sciences (AIIMS) at Mangalagiri and Director, AIIMS at Delhi and was informed that blood samples of the children were sent to Delhi.

The Union Health Minister and the Director of AIIMS assured the Vice President that treatment would be taken up upon diagnosis of the illness on receiving the reports of the blood samples.

The District Collector, Revu Mutyala Raju informed the Vice President that necessary measures were being taken to ascertain the reasons for the illness among the children. He said that a door-to-door survey was being conducted and medical teams from Guntur and Krishna Districts were pressed into service.

The Vice President was also informed that a poison control team from AIIMS had discussed with the Doctors at Eluru regarding the incidence yesterday.

The Union Health Ministry informed that in the wake of the available epidemiological and clinical data from the district, the following central team members were being sent: