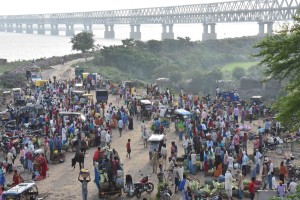 An Administrative Failure: File photo of Patna under lockdown in May. Photo Ashok Sinha

Patna: Bihar chief minister Nitish Kumar’s outburst against the principal secretary in State Health Department Uday Singh Kumawat over inept handling of coronavirus crisis only shows his ‘over-dependence’ on the bureaucracy could also backfire sometimes. Kumawat was taken to task in a cabinet meeting only when state health minister Mangal Pandey complained that the senior officer was not listening him.

After two months, Bihar government once again changed Principal Secretary (health department) as chief minister Nitish Kumar hand picked his ‘blue-eyed boy’ and senior IAS officer Pratyay Amrit to head the department. Earlier, Nitish’s another favourite officer Sanjay Kumar was shunted out from the health department, allegedly under the pressure of BJP. It would be interesting to watch how Pratyay Amrit salvages the image of Nitish government, which has dented ahead of crucial state polls. And more importantly, how he carries out his relationship with state health minister Mangal Pandey. Kumawat lost his job as Principal Secretary (Health) following his differences with Pandey.

Nitish is known for giving too much prominence to the top bureaucracy, having a strong grip over the state of affairs. With  majority of the people’s representatives being relegated to the minions in the present dispensation, common masses have to depend solely on the bureaucracy for their sustenance.

Nitish’ over-dependence on the bureaucracy serves various purposes in doing so. First to shift blame to bureaucrats if something goes wrong and secondly to take full credit if everything goes as planned but the third one is more politically prudent- not to allow anybody to create his own identity. So, the overarching influence of  Nitish could be felt in each department as one-upmanship has been hallmark of his ‘sushashan‘ since beginning.

With assembly elections due later this year, MLAs want bigger role in Covid-19 relief work so that their visibility increases among voters. The state BJP unit had already urged Nitish to ensure its MLAs and ministers are involved in Covid-19 relief work, such as handling migrants and distributing food, masks, PPE kits and foodgrains.

“Elections are approaching. A bureaucrat does not have to face elections, we have to fight them,” remarked BJP MLA Nitin Navin. Another BJP MLA said their role in the pandemic was  “negligible” as the bureaucrats were issuing orders, managing foodgrains, distributing masks and PPEs. He rued that hospitals were under their control but all their work was without accountability.

*The writer is a Patna-based senior journalist. The views expressed are personal.

1 thought on “Can finding scapegoats in state bureaucracy improve Nitish’s sagging image over handling of the pandemic?”