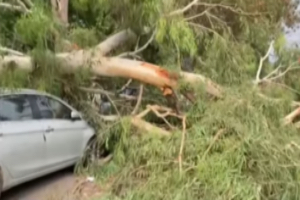 Text and Videos by Pranav Sahi

Patna: At least 23 people died and many got injured when a high-velocity storm swept Bihar from Gopalganj in the west to Katihar in the east. Along with the storm, rains were also reported in many places. Several trees fell down and huts were blown away by the storm.

Eyewitnesses at NIT Ghat, the tourist hub for Ganga cruises in the state capital, reported that many wooden boats capsized near the ghats. Informed sources claimed that several boats which were loaded with sand mined illegally too got drowned during the storm. Sources also reported of three boats loaded with illegally mined sand capsized in Maner near Patna.

Capital Patna was hit by the storm today late afternoon around 4 pm. The gushing winds uprooted more than 200 trees in the city putting life to a standstill. This was unexpected and people were unprepared since it was a hot sultry afternoon.

As per reports coming in from the city, many vehicles parked on the city roads were damaged due to falling trees. Major damages were reported from Bailey Road, Kotwali, Gandhi Maidan and Patna City.

The weather department has warned about an East-West trough running from East UP to Meghalaya through Bihar, South Himalayan West Bengal extending up to 0.9 km above mean sea level.