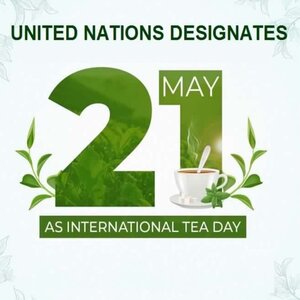 New Delhi: At India’s behest, May 21 is the official tea day for the world now! As the world observes the first International Tea Day today, it is yet another great achievement for the tea-loving Indians.

India had mooted the proposal at the FAO IGG on Tea (Food and Agriculture Organisation Intergovernmental Group) held in Milan in October 2015.

The concerning resolution was adopted on December 21, 2019 and called on  to lead the observance of the Day.

The United Nations General Assembly, in its notification, has stated it recognises the importance of promoting sustainable development in its three dimensions in an innovative, coordinated, environmentally sound, open and shared manner. It referred to  the urgent need to raise public awareness on the importance of tea for rural development and sustainable livelihoods and to improve the tea value chain to contribute to the 2030 Agenda for Sustainable Development.

“The observance of an International Tea Day will promote and foster collective actions to implement activities in favour of the sustainable production and consumption of tea and raise awareness of its importance in fighting hunger and poverty,” it said.

The United Nations General Assembly has further noted that tea consumption can bring health benefits and wellness and also recognised the important role of tea education and its cultural significance. The nodal organisation has invited all States, Members and observers of the United Nations, observers of the United Nations system, other international and regional organisations and other relevant stakeholders, including civil society, the private sector and academia, to observe International Tea Day in an appropriate manner and in accordance with national priorities, through education and activities aimed at raising public awareness of the importance of tea for rural development and sustainable livelihoods.

In fact  benefits of tea has often been the point of discussion during the pandemic time at meetings even at the World Health Organization, when the world is discussing remedies for COVID-19.

In India, to mark the historic occasion, Tea Board is launching the much awaited Jorhat e-Auction Platform and holding a special sale of selected teas today. “This shall be a historic event for various reasons. Firstly, the demand for a separate auction platform in the state of Assam is a long standing demand of the industry to accommodate the volume since Assam contributes more than 50% of the entire country’s production. Further, Assam Orthodox is a GI product which has demand across the world and is an important constituent of the English breakfast tea,” a Tea Board spokesperson stated. The demand of the industry, in fact, has helped Tea Board to re-define the age old auction procedure by introducing certain value added services, he added.

1 thought on “At India’s behest, World celebrates tea time together for the first time today”