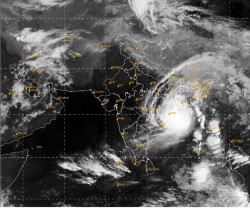 Bhubaneswar/Bhadrak: In Odisha’s capital city Bhubaneswar, which is just about 46.6 miles away from the coast, one can already hear the sound of wind. Rain has continued non- stop from 11 pm last night here, though coastal Balasore experienced rain from 5 pm onwards yesterday.

Wind speed is on the rise and one could feel the difference. At Paradeep port town it’s 98kmph this morning. Cyclone Amphan is still about 180 kms away from Paradip.

It is Paradip in Jagatsinhhpur district (carved out of Cuttack district in 1993) which was the worst affected in the 1999 super cyclone, the deadliest recorded cyclone in Odisha that killed 10000 people.

“Trees are swinging to 60-70 kmph wind and power supply is snapped from around 9 pm yesterday, ” 41-year-old Sisir Ranjan Rout of Bhandaripokhari block of Bhadrak district, who works as a sales manager in a private company, says. The super cyclone AMPHAN is set to cross the region today afternoon or evening.

37-year-old Prahlad Nayak, a resident of  Shankarpur village in Tihidi block of Bhadrak,  sounds more worried: “It is still early hours. We are scared the wind speed may turn furious as the cyclone inches closer,” he says.

In Bhubaneswar, traffic movement is absent on the road. State government had appealed repeatedly to the citizens to stay indoors.

“Cyclone Amphan is a huge challenge before the government, the people and the civil society. we have to deal with both the crisis, COVID 19 and cyclone simultaneously, follow social distancing,” Jagadananda, a well known social activist of Odisha said.  He was also a former information commissioner, odisha.

Power supply has been snapped across majority of the coastal areas which have started to experience the early arrival signals of Amphan. However, in Bhubaneswar, there is no power only since 6.22 am today. Phone line is working but not clearly audible.  Since it’s a summer cyclone, flooding or major water logging is not expected.

*The writer is a senior Bhubaneswar-based journalist