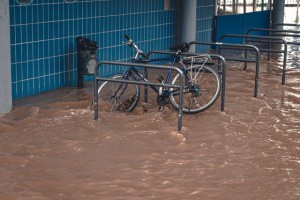 Photo by Mika Baumeister on Unsplash

Patna: Is election-bound Bihar heading towards President’s rule? This is the question now being discussed in administrative and political circles in view of  floods in major parts of North Bihar and an “unprecedented” spike in COVID-19 cases.

As per section (e) of Article 356, if elections are postponed on account of situations like natural disasters, war or epidemic, the state can been placed under President rule.

The main opposition Rashtriya Janata Dal has already fired a letter to the election commission seeking postponement of the assembly polls in view of the prevailing flood situation and unprecedented spike in COVID-19 cases in Bihar.

Even Ram Vilas Paswan led Lok Janshakti party(LJP), one of the constituents of Bharatiya Janata Party-led National Democratic Alliance (NDA), has opposed holding of assembly polls amid the twin calamities.

The ruling Janata Dal (United) – led NDA in Bihar which had taken the lead in launching the poll campaign with a virtual “Bihar Jansamvad” rally addressed by Union Home Minister Amit Shah on June 7, has retracted  in the face of mounting criticism.

The  double whammy of surging number of COVID-19 cases and ravaging floods in the state has  definitely put a question mark on conducting the polls. Though life would limp back to normal after the annual floods, projections of the future number of cases of coronavirus are fraught with high levels of  uncertainty. Political considerations apart, the twin calamities have badly exposed the preparedness of the Nitish Kumar government in tackling natural disasters.

The floods  have  so far affected nearly  5 million people in 1043 panchayats of 112 blocks spread over 14 districts. At least  24  people have also perished. On the other hand the deadly COVID-19 virus has claimed 293 lives and 54.508 people have contracted the disease till date with the state capital alone accounting for more than 9,000 cases.

Though no country was prepared to handle the pandemic of this magnitude, yet the Bihar government was found woefully short of providing even a semblance of medicare to the suffering masses. That the state government was not prepared to meet the challenges arising out of the pandemic could be gleaned from the fact the  government did precious little to improve the health infrastructure when the entire country was placed under lockdown in the last week of March.

Instead of using the “lockdown” to  improve the medical infrastructure, which is among the worst in the country, the Chief Minister, critics say, concentrated more on denying entry of migrant workers and students studying outside the state.

Even when the pandemic had not assumed alarming propositions,the government adopted  a piecemeal approach to fight the menace. All hell broke loose when there was sudden spurt in COVID-19 cases across the state. While poor ran from pillar to post to save life of their near and dear ones, even high and mighty found it difficult to secure admission of their patients due to non-availability of beds.

To make matter worse private hospitals are not admitting patients with cough and fever symptoms due to the fear that their doctors and nursing staff would get afflicted. Mahavir Arogya Sansthan, a charitable trust for cancer patients closed down after 60 of its employees including doctors and nurses tested positive for COVID-19.

At least 15 private and government doctors have succumbed to the deadly virus and nearly 350 health workers have fallen sick while treating the patients across the state. The government has now made arrangements for paid isolation facility in hotels for them following protest by the Bihar chapter of Indian Medical Association(IMA).

Dr. Sunil Kumar, honorary general secretary of Bihar IMA, said there are only 6,500 government doctors to serve over 12 crore people in the state whereas 16,500 posts of allopathic doctors are lying vacant for the last several years. If the government was serious in combating the pandemic, it could have appointed doctors on adhoc basis, he added. As per World Health Organisation there should be one doctor for 1000 people,but in Bihar the doctor to patient ratio is more than 1:44,000,Kumar claimed.

On measures needed to combat the pandemic, Kumar said testing will have to be taken to a new level because as of July 31 Bihar had the dubious distinction of recording 4210 tests per million while the national test per million was on the same date was 13,733.

The situation, he said, will worsen in the flood hit districts because it was not humane to expect flood ravaged people wearing masks and maintaining social distance .For them  survival and making both ends meet was more important.

The government on its part has asked the district authoriies to take COVID-19 factor into account while providing relief to those taking shelter at relief centres.

According to state disaster management bulletin 3.92 lakh people have been evacuated and more than 26,000 people were taking shelter at relief centres.