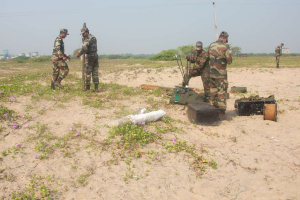 New Delhi/Mumbai: In face of massive protests across the country over the ‘Agnipath’ scheme, the government today stepped in with a slew of offers for the Agniveers in a bid to assure them of a secured future after their four-year-stint in the armed forces.  While the

Defence Minister Rajnath Singh today approved a proposal to reserve 10% of the job vacancies in the Ministry of Defence for Agniveers meeting requisite eligibility criteria.

This reservation would be in addition to existing reservations for ex-servicemen.

The 10% reservation will be implemented in the Indian Coast Guard, defence civilian posts and all the 16 Defence Public Sector Undertakings (DPSUs).

The Ministry of Ports, Shipping & Waterways  (MoPSW) announced six service avenues “for a smooth transition” of Agniveers in various roles of the Merchant navy, post their stint with the Indian Navy. The scheme will enable them to acquire necessary training, with rich naval experience and professional certification to join the remunerative merchant navy across the world.

The provisions were announced by the Directorate General of Shipping, a Ministry of Ports, Shipping & Waterways organization in Mumbai today.

The MoSPW will issue INDOS and CDC for those Agniveers who intend to explore any of the said schemes through the Indian Navy. Some of the schemes are devised for Agniveers with Diploma in Mechanical or Electrical Engineering or ITI Trade Certificate in Electronic or Electrical stream – either joining with these qualifications or acquiring these during their tenure with the Indian Navy.

The Ministry of Home Affairs (MHA) today announced its decision to reserve 10 per cent vacancies for recruitment in Central Armed Police Forces (CAPFs) and Assam Rifles for Agniveers, completing four years under the ‘Agnipath’ Scheme.

Earlier, the government had yesterday announced increasing the upper age limit for the recruitment process of ‘Agnipath’ scheme for 2022 to 23 years. It may be mentioned that earlier, consequent to the commencement of the scheme, the entry age for all new recruits in the Armed Forces had been fixed as 17 ½  – 21 years of age. “Cognizant of the fact that it has not been possible to undertake the recruitment during the last two years, the Government has decided that a one-time waiver shall be granted for the proposed recruitment cycle for 2022,” the Ministry of Defence stated.