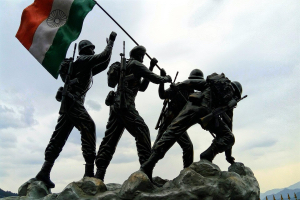 New Delhi: The Union Cabinet today approved ‘AGNIPATH’, a recruitment scheme for Indian youth to serve in the Armed Forces for a period of four years. During this period of service to the nation, the youth selected under this scheme will be known as Agniveers and will be imparted with various military skills and experience, discipline, physical fitness, leadership qualities, courage and patriotism. The eligible age to apply will be in the range of 17.5 to 21 years. The educational qualification for Agniveers will remain as in vogue for enrollment in various categories. {For example: For entry into General Duty (GD) soldier, the educational qualification is Class 10}.

Post a stint of four years, the Agniveers will be infused into the civil society where they can contribute immensely to the nation-building process.

The scheme is designed to enable a youthful profile of the Armed Forces and upon the completion of four years of service, based on organisational requirements and policies promulgated by the Armed Forces from time to time, Agniveers will also be offered an opportunity to apply for permanent enrolment in the Armed Forces. These applications will be considered in a centralised manner based on objective criteria including performance during their four-year engagement period and up to 25% of each specific batch of Agniveers will be enrolled in the regular cadre of the Armed Forces. Detailed guidelines will be issued separately. Once selected, they would be required to serve for a further engagement period of a minimum of 15 years and would be governed by the existing terms and conditions of service of Junior Commissioned Officers/Other Ranks in the Indian Army and their equivalent in the Indian Navy and Indian Air Force and that of Non-Combatant enrolled in the Indian Air Force, as amended from time to time.

This is a major defence policy reform introduced by the Government “to usher in a new era in the Human Resource policy of the three Services”, a Cabinet note said.  The policy, which comes into immediate effect, will hereafter govern the enrolment for the three services. It is envisaged that the average age profile of the Indian Armed forces would come down by about 4-5 years by the implementation of this scheme.

Benefits to the Agniveers

Agniveers will be given an attractive customised monthly package along with Risk and Hardship allowances as applicable in the three services. On completion of the engagement period of four years, Agniveers will be paid one time ‘Seva Nidhi’ package which shall comprise their contribution including accrued interest thereon and matching contribution from the Government equal to the accumulated amount of their contribution including interest as indicated below: 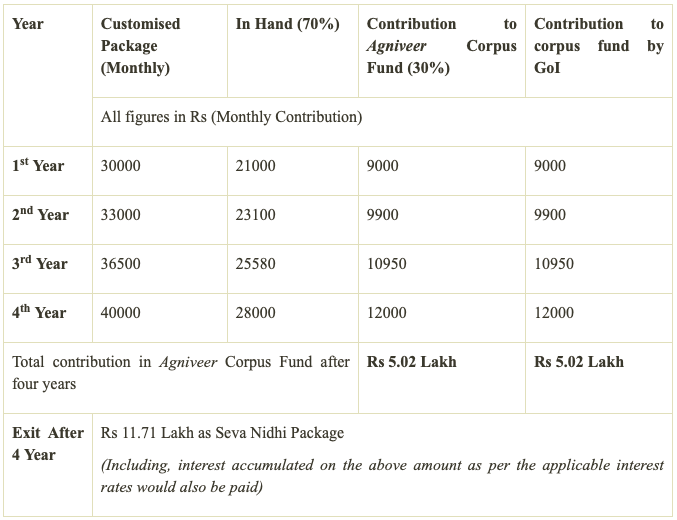 The ‘Seva Nidhi’ will be exempt from Income Tax. There shall be no entitlement to gratuity and pensionary benefits.  Agniveers will be provided with a non-contributory Life Insurance Cover of Rs 48 lakhs for the duration of their engagement period in the Indian Armed Forces.