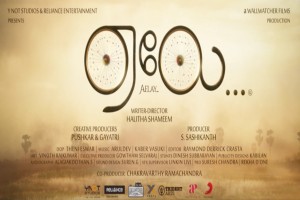 Chennai: Producers of Aelay had to forego the planned grand worldwide theatrical release on February 12, and settle for a Worldwide Television Premiere on Star Vijay on February 28, 2021 at 3 pm, due to a policy revision stipulated and brought into effect by the Tamil Nadu Theatres and Multiplex Owners Association, just 3 days ahead of the release of the movie. Incidentally, Aelay  now becomes the first-ever Tamil movie to have a direct satellite premiere on Star Vijay channel.

The film starring  Samuthirakani and Manikandan in lead roles, is written and directed by  filmmaker Halitha Shameem, who has continuously won critical acclaims for creating movies rich in emotions and portraying relationship values exquisitely. It is produced by S. Sashikanth of Y Not Studios in association with Reliance Entertainment and is co-produced by Chakravarthy Ramachandra.

Speaking about the film, Sashikanth said it encompasses emotions and humour with realistic shades. Shibasish Sarkar, Group CEO, Rliance Entertainment, described it as a family film and said “bringing this heart-warming film to our audience’s homes is an absolute privilege”.

The film is made to savour the tastes of family audiences and Shameem said Aelay had been close to  her heart even before she embarked on her journey as a film maker. “I am glad that my film ‘Aelay’ is now going to witness a phenomenal reach across a wide range of audience. It’s exhilarating to see that the film will be available to huge crowds on the same day,” she said about the change in the release plans.

“I thank my producers and Star Television for backing this film and ensuring the best platform to showcase this to the world, through this television premiere,”Shameem added.