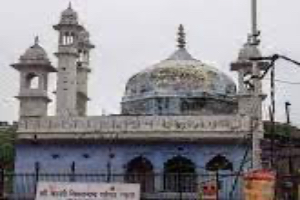 New Delhi/Varanasi: The Supreme Court today asked the Varanasi District Magistrate to ensure the protection of the area where the ‘Shivling‘ was found in the Gyanvapi Mosque but without stopping the namaz or imposing any restriction on the number of Muslims entering the complex for performing religious rituals.

The apex court was hearing a petition of the committee which manages the affairs of Gyanvapi mosque and had sought the court’s directive to the Varanasi administration to stop making videos of the mosque complex.

The court asked about the exact location of the ‘Shivling‘ inside the mosque but Solicitor General Tushar Mehta, who appeared for the Uttar Pradesh government, “We haven’t seen the report”. While he sought time till tomorrow to return with details, Mehta said the place where the ‘Shivling‘ was found was sealed to avoid any law and order issues.

In the meantime, in Varanasi, the court of civil judge (senior division) Ravi Kumar Diwakar that had ordered the videography survey of the Gyanvapi mosque complex, removed advocate commissioner Ajay Mishra for  “irresponsible behaviour towards the discharge of his duties”. It also granted two more days to the commission to file the survey report.

The removal order came on an application moved by special advocate commissioner, Vishal Singh, who informed the court that Mishra had “deployed a personal cameraman who was giving the wrong byte in the media on a regular basis.”

In its order, the court removed  Advocate Commissioner Ajay Kumar Mishra with immediate effect for his “irresponsible behaviour towards the discharge of his duties”. The court noted that the private cameraman deployed by him, gave bytes to the media regularly, “which is against judicial dignity”.

The court further directed that all the work of the commission after May 12 will be submitted by Vishal Singh and assistant advocate commissioner Ajay Pratap Singh will work under his direction.

Meanwhile, two separate petitions were filed by Sadhvi Purnamba and Sadhvi Shardamba, supposed to be the disciples of Shankaracharya Swami Swaroopanand Saraswati of Dwaraka and Jyotish Peeth, in the court of civil judge (senior division) Ravi Kumar Diwakar in Varanasi today. The two petitions respectively sought the court’s permission to perform ‘puja-archana’ of the ‘shivling’, and the court’s order to demolish the walls at the basements of the mosque.