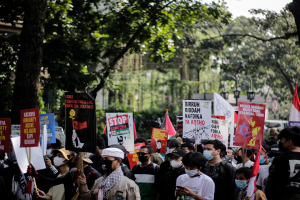 Geneva:  Following the judgement of the Israeli High Court of Justice earlier this month, around 1,200 Palestinian residents of Masafer Yatta, including 500 children, face imminent risks of forced evictions, arbitrary displacement and forcible transfer, in serious breach of international humanitarian and human rights laws.

“We are monitoring with concern the latest information indicating that the Israeli forces have demolished structures in the Masafer Yatta communities of Khribet al Fakhiet and al-Markez. These demolitions place them at immediate risk of forcible transfer,” a UN Human Rights press release stated quoting UN experts. The experts –  Francesca Albanese, United Nations Special Rapporteur on the situation of human rights in the Palestinian Territory occupied since 1967; Cecilia Jimenez-Damary, Special Rapporteur on the human rights of internally displaced persons; and Balakrishnan Rajagopal, Special Rapporteur on adequate housing as a component of the right to an adequate standard of living, and on the right to non-discrimination in this context – are in contact with the Government of Israel on the issue.

It may be mentioned that on May 4, 2022, the Israeli High Court of Justice rejected appeals against eviction orders issued to Palestinian inhabitants of Masafer Yatta, the area designated as a closed military training site, “Firing Zone 918”, south of Hebron. The decision effectively ends the legal proceedings that lasted for more than two decades, thereby permitting the Israeli forces to clear and use the area for military training.

“By upholding this policy to drive Palestinians out of Masafer Yatta, the Israeli judicial system has given carte blanche to the Israeli Government to perpetuate the practice of systematic oppression against Palestinians,” said the experts. They termed it “all the more disconcerting, as it is done to allow Israeli military training in the area”, and asked how could this be given priority over the rights of the Palestinian residents?

Israel has shown no ‘imperative military necessity to vacate the area. The displacement of the Masafer Yatta communities may thus amount to a war crime, the UN Human Rights Office said, while urging Israel and the international community to urgently stop the forced evictions, arbitrary displacement and forcible transfer of Palestinian communities from Masafer Yatta in the occupied West Bank.

The experts expressed particular concern that the Court narrowly construed the definition of ‘forcible transfer’ prohibited under international humanitarian law and inexcusably dismissed the relevance of fundamental provisions of international law in the domestic context.

“Dismissing, as not relevant or not binding, norms and principles that are foundational of international law is a worrisome indication that the Israeli judicial system is supportive of laws and practices that have progressively crystallized the subjugation of the Palestinians in the occupied Palestinian territory,” the experts said.

“A Court that does not provide justice based on international norms and that perpetuates the violations of fundamental human rights of people who have been under military occupation for 55 years, becomes itself part of the structural system of oppression.”

The experts further called on the international community to take steps to prevent the forcible transfer of the Masafer Yatta residents.

“The international community must not become complicit to this serious violation of international humanitarian and humanitarian laws by remaining silent: it must exert available diplomatic, political and economic measures prescribed by the UN Charter to bring Israeli violations to a halt,” said the experts.