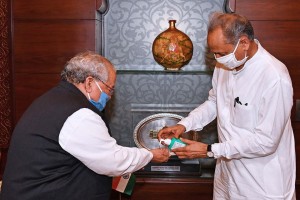 The political tussle within Rajasthan Congress has now landed in court, with Sachin Pilot and 18 other MLAs challenging their disqualification by the Assembly Speaker. A  division bench of the Rajasthan High Court, which heard the matter, though, has deferred the matter till Monday.

On late Saturday evening the state chief minister Ashok Gehlot met Governor Kalraj Mishra for 45 minutes here amidst the brewing political crisis in the Congress-ruled state. A Raj Bhawan spokesperson termed it a courtesy meeting between the two where the CM briefed the Governor about the steps to contain the COVID-19 pandemic.

But the political situation in the state still quite fluid. Sources suggest Gehlot met the Governor to express his  willingness to prove his majority.

The current set of actors in the political drama of Rajasthan have their roots in a deeply rooted caste equation in the State of Rajasthan which has lasted for decades. It has resulted in a caste war between the dominant Jats, Gujjars, Meenas and Rajputs for representation and also appeasement has led to this piquant situation where both BJP and Congress are at loggerheads with an air of uncertainty hanging around what action will take place on ground after Sachin Pilot along with 18 MLAs revolted.

Pilot happens to be a Gujjar whereas Gehlot is from the Mali caste and is not regarded as a threat by any of the people hailing from the dominant castes. While Gehlot has been chief minister alternating with BJP’s Vasundhara Raje Scindia’s terms, Pilot who rescued the Congress after the 2014 fiasco the Congress faced in the General elections, was sidelined to second position as Deputy Chief Minister. Gehlot was named CM after the state elections. Needless to say, the Gujjars are unhappy with the Congress for not pandering to their sentiments by placing persons from their caste in key positions.

The story that is playing out is about a generation gap between the young Turk Pilot and the elder Gehlot. It’s also pointed out that the state Congress chief has very little power or standing to mediate between Gehlot and Pilot. In addition, the Central leadership is also regarded as weak and not having much say over the Party’s state unit.

Gehlot sent a show cause notice to Pilot and his supporters using the behest of the speaker. Following which, Pilot and his group of loyalists petitioned the Rajasthan High Court seeking redressal to the action taken against them. Unlike in Madhya Pradesh, where BJP managed to topple the Congress government when Jyotiraditya Scindia along with his loyalists broke free from the MP state assembly, the margin between the Congress and BJP is significant and the BJP will find it tough to negotiate.

In the following days, Pilot is said to have met P Chidambaram, the ex-Union home minister during Congress rule. He then came out with the statement that he will not be joining the BJP.  The statement drew sharp response from Congress stalwarts like Kapil Sibal who asked on his twitter handle, “What about Ghar Wapsi?”

The Rajasthan High Court extended the timeline granted to Pilot till Monday next. In an interim development Congress and BJP state leaders were at loggerheads over the leaking of an audio tape which reveals a plot to topple the Ashok Gehlot led government. The conspirators whose voices were tape-recorded were named as Union Minister of Jal Shakti, Gajendra Singh Shekhawat and Congress MLA Bhanwarlal Sharma.

Alleging that the Rajasthan state government was resorting to unconstitutional means to save themselves from being faced with a tight corner, BJP spokesperson Sambit Patra condemned the act and the BJP High Command asked for a CBI inquiry into the matter.

Congress spokesperson Pawan Khera, shot back at the BJP, saying, “By saying this, the BJP has blatantly admitted to its attempt on killing democracy. Their only concern is that how did this get recorded and what can be done to control damage from their end.”

The Ministry of Home Affairs too has pitched in and sought a report from Rajasthan’s Chief Secretary over the phone tapping issue in the state.

This weekend has proved to be a day of high drama in the political circus playing out in Rajasthan. Both the national political parties – the Bharatiya Janata Party and the Congress that rules the state – indulged in a free-for-all mud-slinging match, each accusing the other for undermining the provisions of the Constitution. While the Congress accused BJP of making a mockery of democratic values by resorting to underhand tactics, the BJP sought a Central Bureau of Investigation probe into how the conversations between ministers and politicians get subjected to taping.

The political drama is still unfolding in the state. Can the BJP up the ante in the state which was not very long ago a saffron bastion, or can the Congress hold the reins? Let’s wait and watch.