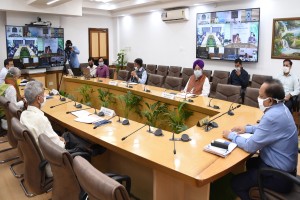 New Delhi:  A high-level Group of Ministers (GoM) on COVID-19 under the chairmanship of Union Health Minister Dr. Harsh Vardhan on Thursday took note that 80 per cent deaths were from just 32 districts of the country, and merely six states accounted for 86% of total deaths. These states were Maharashtra, Delhi, Gujarat, Tamil Nadu, Uttar Pradesh and West Bengal.

The GoM took stock of the special efforts that were being made in the regions showing higher Case Fatality Rate.

Dr Harsh Vardhan stated that the focus should now be on the management of COVID-19 through “strict containment measures and surveillance; utilizing full testing capacity; focus on monitoring of co-morbid and elderly population; predicting emerging hotspots leveraging digital tools such as Aarogya Setu; ensuring seamless patient admission processes; focus on infrastructure preparedness (critical care beds, oxygen, ventilators and logistics).” He stressed that “along with States/UTs, our aim is to reduce and keep the Case Fatality Rate low by early identification and effective clinical management”.

Dr. Sujeet K Singh, Director (National Centre for Disease Control) presented a detailed report on surveillance efforts undertaken in India during the pandemic. The focus was on strict containment strategy and surveillance through SARI/ILI cases, serological survey and increase in lab network to widen countrywide testing. The major concern areas in the country were highlighted and the measures to be taken were listed including timely clinical management along with testing and surveillance in the high risk population with co-morbidities to reduce the Case Fatality Ratio.

At the outset, the GoM was briefed on the current status of COVID-19 in the country and a  global comparison between the five most affected countries  depicted that India had “one of the lowest cases per million (538) and deaths per million (15) compared the global average of 1453 and 68.7, respectively”. It was noted that as on today, there were total 3914 facilities in the country with 3,77,737 Isolation beds (without ICU support), 39,820 ICU beds and 1,42,415 oxygen supported beds along with 20,047 ventilators. In terms of healthcare logistics, cumulatively 213.55 lakh N95 masks, 120.94 lakh PPEs and 612.57 lakh HCQ tablets had been distributed.

Moreover, in a presentation,  Amit Khare, Chairman of Empowered Group-8 (on Information, Communication and Public Awareness), told the GoM that the group had received 6,755 alerts of fake news out of which 5,890 were replied to directly and rebuttals were published to 17 foreign media stories.