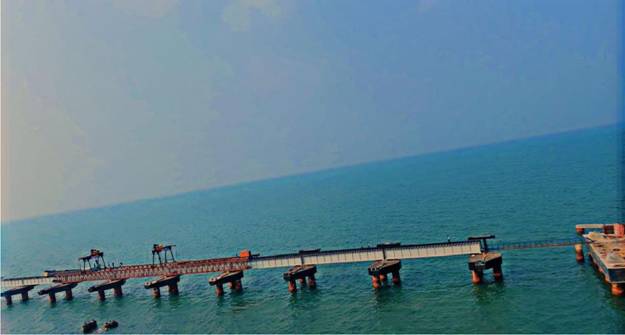 Rameswaram: The reconstruction work on the new 2.05 km Pamban railway sea bridge which will connect Rameswaram island to the mainland in Tamil Nadu has gathered pace. Until now, 84% of the construction work has been completed and track laying work is in progress.

This state-of-the-art bridge will be the country’s first vertical lift railway sea bridge and is expected to be completed by March 2023. 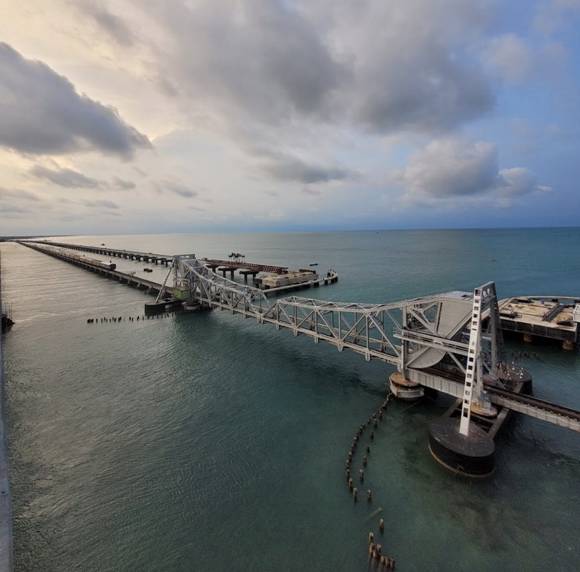 The Railways Ministry said that the substructure work has been completed fully which includes 333 Piles and 101 Pile caps. Fabrication of all 99 approach spans completed, out of which 76 girders have been launched. Fabrication of the Vertical Lift Span girder is nearing completion. The Assembling Platform for the Vertical Lift Span on the Rameswaram end of the bridge is getting ready. Track laying work is in progress.

The sea bridge is being executed by Rail Vikas Nigam Limited (RVNL) at a cost of Rs 535 crores. The bridge will allow the Indian Railways to operate trains at a higher speed. It will also increase traffic between the mainland of India and Rameswaram island.

The existing Pamban Rail Bridge, which connects Rameswaram to mainland India, is 105 years old. The original bridge was built in 1914 to connect Mandapam to the Rameswaram island situated in the Gulf of Mannar. It was the only link connecting the two locations until a new road bridge was built parallel to the sea link in 1988.