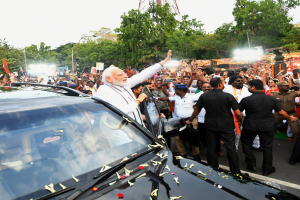 Chennai: Prime Minister Narendra Modi said the Centre was “fully committed” to further popularising the Tamil language and culture. Modi, who dedicated to the nation and laid the foundation stone of 11 projects worth over Rs 31,500 crore here today, referred to the inauguration of the new campus of the Central Institute of Classical Tamil here in January this year, and pointed out that the new campus is fully funded by the Union Government.

Asserting that the new National Education Policy gives special importance to promoting Indian languages, Modi mentioned that a ‘Subramania Bharati Chair’ on Tamil Studies at Banaras Hindu University was recently announced. “Due to the National Education Policy, technical and medical courses can be done in local languages. Youngsters from Tamil Nadu will benefit from this,” he said.

Modi also referred to the situation in Sri Lanka and said as a close friend and neighbour, India was providing all possible support to the island nation which is passing through difficult times. This included financial support, support of fuel, food, medicines and other essential items, he said and mentioned that India had also spoken strongly in the international fora for extending economic support to the country. “India will continue to stand with the people of Sri Lanka and support democracy, stability and economic recovery in Sri Lanka,” he said. Recounting his visit to Jaffna a few years ago, he said the Indian government was undertaking numerous projects to assist the Tamil people in Sri Lanka. “These projects cover healthcare, transportation, housing and culture,” he said. He said, “I can never forget my visit to Jaffna a few years ago. I was the first Indian PM to visit Jaffna.”

Meanwhile, the projects dedicated to the nation by Modi today in Chennai are worth over Rs 2960 crore. They are:

The programme also witnessed the inauguration of 1152 houses constructed as part of the LightHouse Project – Chennai, built at a cost of Rs 116 crore under Pradhan Mantri Awas Yojana-Urban.

The 4 Lane double-decker elevated road connecting Chennai Port to Maduravoyal (NH-4), of about 21 km in length, will be built at a cost of over Rs 5850 crore. It will facilitate the round the clock approach of goods vehicles to Chennai port. The ​​94 km long 4-lane Neraluru to Dharmapuri section of NH-844 and 31 km long 2-lane with paved shoulders of Meensurutti to Chidambaram section of NH-227, being built at a cost of around Rs 3870 crore and Rs 720 respectively, will help provide seamless connectivity in the region.

The foundation stones for the redevelopment of five Railway stations – Chennai Egmore, Rameswaram, Madurai, Katpadi and Kanyakumari – were also laid during the programme. This project will be completed at a cost of over Rs. 1800 crore, and is being undertaken with a view to enhancing the convenience and comfort of the passengers through the provision of modern amenities.

The PM also laid the foundation stone of a Multi-Modal Logistic Park at Chennai worth around Rs. 1430 crore. It will provide seamless intermodal freight movement and also offer multiple functionalities.