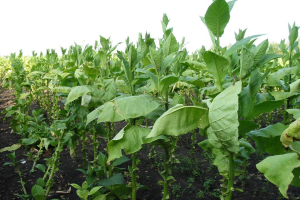 Geneva: The World Health Organization (WHO) has today revealed new information on the extent to which tobacco damages both the environment and human health, calling for steps to make the industry more accountable for the destruction it is causing.

The majority of tobacco is grown in low-and-middle-income countries, where water and farmland are often desperately needed to produce food for the region. Instead, they are being used to grow deadly tobacco plants, while more and more land is being cleared of forests.

The WHO report “Tobacco: Poisoning our planet” highlights that the industry’s carbon footprint from production, processing and transporting tobacco is equivalent to one-fifth of the CO2 produced by the commercial airline industry each year, further contributing to global warming.

“Tobacco products are the most littered item on the planet, containing over 7,000 toxic chemicals, which leech into our environment when discarded. Roughly 4.5 trillion cigarette filters pollute our oceans, rivers, city sidewalks, parks, soil and beaches every year,” said Dr Ruediger Krech, Director of Health Promotion at WHO.

Despite tobacco industry marketing, there is no evidence that filters have any proven health benefits. WHO calls on policy-makers to treat cigarette filters, as what they are, single-use plastics, and consider banning cigarette filters to protect public health and the environment.

The costs of cleaning up littered tobacco products fall on taxpayers, rather than the industry creating the problem. Each year, this costs China roughly USD 2.6 billion and India roughly USD 766 million. The cost for Brazil and Germany comes in at over USD 200 million (see table below for further estimates).

Countries like France and Spain and cities like San Francisco, California in the USA have taken a stand. Following the Polluter Pays Principle, they have successfully implemented “extended producer responsibility legislation” which makes the tobacco industry responsible for clearing up the pollution it creates.

WHO urged countries and cities to follow this example, as well as give support to tobacco farmers to switch to sustainable crops, implement strong tobacco taxes (that could also include an environmental tax) and offer support services to help people quit tobacco.

In the table below, are the estimates of tobacco product waste (TPW) attributable costs in one country from each of the WHO regions. These estimates are based on the “proportional estimation” approach, which starts with an estimate of the costs of total litter (“all product waste,” or APW) for each country, and then applies an estimate of the proportion of all litter that is TPW (i.e., a TPW “weight”). 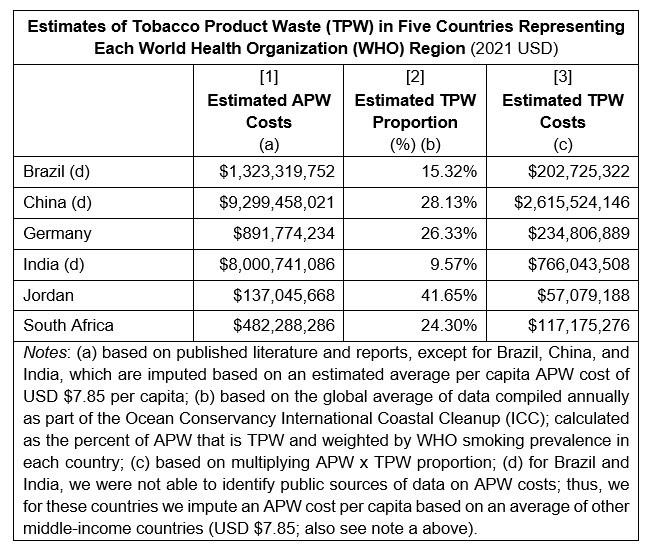 For estimated APW costs (column [1]), we relied on publicly available literature and reports for as many of the six countries as possible.  For Brazil, China, and India, we were not able to identify any sources. Thus, for those countries, we imputed APW costs by applying the average APW cost per capita of similar middle-income countries for which data were available. Once we had APW cost for all countries, we applied the TPW proportion. The TPW proportion was based on the global average from the Ocean Conservancy’s International Coastal Cleanup, weighted by the WHO smoking prevalence in each country (i.e., we assumed that countries with higher rates of smoking would have higher proportions of TPW).  The final TPW cost estimate is the APW cost multiplied by the weighted TPW proportion.