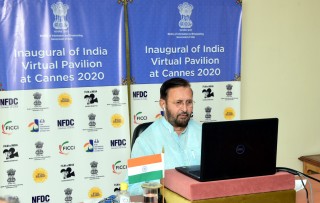 New Delhi: To mark the centenary year of legendary filmmaker Satyajit Ray, the Virtual India Pavilion, which was inaugurated on Monday at Cannes Film Market 2020, would showcase some of Ray’s exquisite work: Ganashatru, Ghare Baire, Agantuk, and Music of Satyajit Ray at the Pavilion’s website.

The purpose of the Virtual India Pavilion would be to showcase Indian cinema across linguistic, cultural and regional spheres. It would facilitate  forging international partnerships in distribution, production, filming in India, script development and technology and promoting film sales and syndication. It would also serve as an information dissemination point about India and  Indian cinema for the global film community. The pavilion would further facilitate business meetings and linkages between filmmakers and other media and entertainment industry stakeholders.

Inaugurating the Pavilion here, Union Information and Broadcasting Minister Prakash Javadekar said “virtual inaugurations are the new normal and these virtual spaces are the new places for real partnerships”. He added that films were India’s soft power and the film facilitation office would be made a single window for all Center and State government permissions. The Minister invited international film fraternity to come shoot in India and sell in the world market.

Between June 22 – 26, 2020, the India Pavilion would be organizing various sessions on areas such as “Future of films in a post COVID world”, “Come, Film in India”, “Taking Indian Content to Global Markets: Importance and Role of film festivals in the age of Digital Platforms”, “Export of Indian Film Services to the world/Servicing the World Entertainment, and re-energising co-productions”.

Three roundtables, with Film Commissions, Film Festivals and Film Funds are also set to be organized to discuss threadbare the ideas on promoting Indian films and to anchor partnerships between the domestic and global media & entertainment industry players.