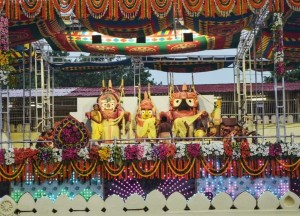 New Delhi:  The Supreme Court on Monday lifted its earlier order and permitted the annual rath yatra of Lord Jagannath in Puri on June 23 on condition that the yatra would be held without people’s participation to avoid spread of COVID-19 pandemic.

A virtual court Bench led by Chief Justice of India Sharad A. Bobde ordered “strict curfew” in the city of Puri from the night of June 22 till the completion of the festival.

“If it is possible to ensure that there is no public attendance, we see no reason why the Rath Yatra cannot be conducted safely along its usual route from temple to temple,” the court said.

Also read: The upcoming Jagannath Rath Yatra during pandemic is a challenge to the authorities

The court laid down eleven conditions and directed that only those 500 people who were tested COVID-19  negative would pull the chariot while maintaining proper distance.

“We take a note of the fact that the State of Orissa has a good record of having controlled the pandemic with a very little loss of life. We see no reason why the same attitude of care and caution should not be applied to the Rath Yatra,” the court said.

Earlier on June 18, the apex court had stayed this year’s Rath Yatra and had ordered: “We direct that there shall be no ‘rath yatra’ anywhere in the temple town of Odisha or in any other part of the State this year. We further direct that there shall be no activities secular or religious associated with the rath yatra during this period.” Then Chief Justice Bobde had observed orally, “Lord Jagannath won’t forgive us if we allow the yatra”.

The Bench however opted for an injunction following an  application by the chairman of the Puri Jagannath temple administration, Gajapati Maharaj, who pleaded that it was possible to hold the festival “in a limited way without public attendance”.

“If it is possible to ensure that there is no public attendance, we see no reason why the Rath Yatra cannot be conducted safely along its usual route from temple to temple,” the court said.

Following the Supreme Court verdict, Union Home Minister Amit Shah tweeted that “Considering the urgency and importance of the matter, it was placed in front of a vacation bench of the Supreme Court and the hearing took place this afternoon, which paved the way for the important decision by the SC”. He revealed in another tweet:  “Last evening, as per the instructions of the Prime Minister, I spoke to Gajapati Maharaj Ji (The King of Puri) and the respected Shankaracharya Ji of Puri and sought their views on the Yatra. This morning, on PM’s instructions, I also spoke to the Solicitor General,” he said.  Hailing today’s court verdict, he also tweeted: “Today is a special day for all of us, particularly our Odia sisters and brothers as well as devotees of Mahaprabhu Shri Jagannath Ji. The entire nation is delighted by the decision of the Honourable Supreme Court to ensure the Rath Yatra goes on.”